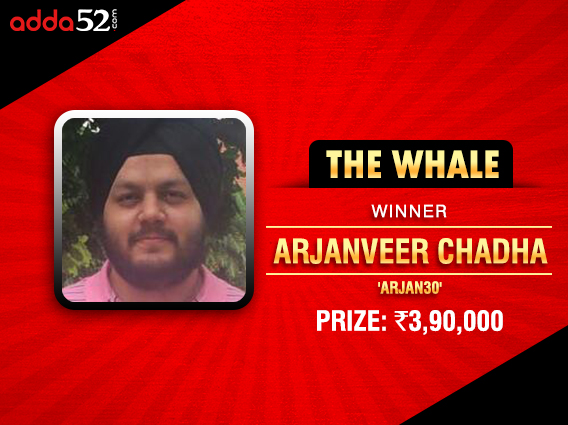 All the top poker players look forward to featured tournaments across the major Indian poker websites, as they present chances to secure big wins each night. Fridays are no different and Adda52, in particular, hosts a high-value tournament called The Whale 6-Max each Friday night, and last night’s tournament was as competitive as ever.

The Whale kicked off last night at 8pm and this INR 7,500 buy-in tournament saw a number of known Indian pros taking part, with a total of 203 registered entries eventually joining. Ultimately, the grind came to an end at 4:36am this morning, meaning over 8 and a half hours of intense poker action on Adda52.

The top 27 players from this field were paid out a minimum cash prize of INR 9,000 each and there were many regulars in this field too. Recent Godfather tournament winner Mihir Thakkar aka ‘gameofdeath’ and recent Godfather 5.0 series winner Alok Ranjan aka ‘darkmatter’ both took home min-cashes, finishing 20th and 26th respectively.

Rajat Sharma aka ‘Oshoswami’ and Akshay Nasa aka ‘vibaks’ finished 17th and 18th respectively, for a prize of INR 11,250 each. Sajal Gupta aka ‘sa_jal’ also made a good run to finish in 11th position for INR 18,750 and here’s where the massive pay jumps began, and the competition got tougher.

Eventually, we landed at a star-studded 3-way play situation with Arjanveer Chadha aka ‘arjan30’, Tarun Goyal aka ‘aggtarun’ and Kavish Kukreja aka ‘narcoss’, all having plenty of poker accomplishments in the respective careers. Kukreja shipped the Adda52 Millions tournament less than a week back on Adda52.

However, he couldn’t go all the way this time around, busting in 3rd place for INR 1,87,500 before a very long and strenuous heads-up battle began between Goyal and Chadha. Eventually, after plenty of hands folded and leads exchanged, it was Chadha who managed to take down the title, winning INR 3,90,000 for shipping the tournament. Goyal had to settle for INR 2,47,500 for finishing second.

Gutshot caught up with Arjanveer after he added yet another title to his overflowing trophy cabinet. He said, “It was my longest and most gruesome heads-up match ever. It must have lasted for more than 90 minutes. It was against Tarun Goyal (aggtarun). It had everything a HU match could have. The chip lead exchanged so many times that I lost count. Ultimately, I was delighted to have won it.”