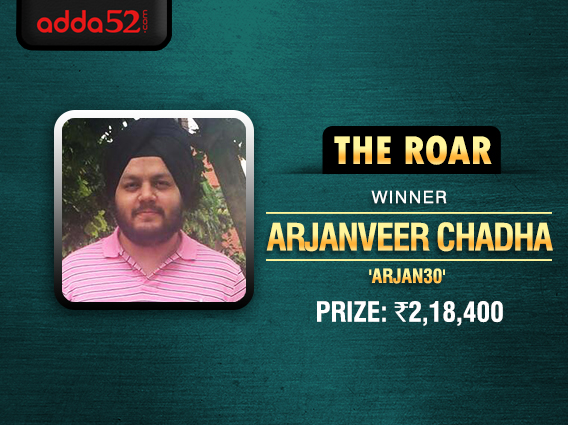 As do most of the top poker companies in the country, Adda52 also hosts daily featured tournaments on their platform, which include The Roar, Judwaa, Godfather, Whale, Hitman, Adda52 Millions, Sunday Suits, Sunday AF tournaments and Beast. All of these take place on a certain day of the week and yesterday being a Monday, the company hosted The Roar INR 7 lakh GTD tournament.

The INR 4,400 buy-in tournament takes place every Monday at 8pm and it attracts some of the best players in India. Yesterday, a total of 182 entries registered to the tournament, with the guarantee being slightly beaten and a new prize pool of INR 7.28 lakh being generated.

This prize pool was shared among the top few finishers in this tournament, but the player who kicked away his Monday blues and shipped the tournament was none other than Arjanveer Chadha aka ‘arjan30’. He topped this field and took away the biggest prize of all – INR 2,14,800.

In heads-up, he defeated ‘MegaFish1’, who also took away a decent 6-figure cash for finishing second. Yesterday, we reported news of Anujkumar Kodam shipping Adda52’s Sunday Suits tournament, where MegaFish1 finished second as well, which shows that he may not be such a fish on the poker tables after all.

Coming back to Chadha, this player has been regularly winning top online poker tournaments in India, across all major websites. The Spartan Poker has been a happy hunting ground for him in recent months, where he shipped The Flash in May, a Mega Stack title in June, a prestigious IOPC title in July and then back-to-back Daredevil titles in August, playing under the name ‘instrumental’. Clearly, he’s now a major contender in big online tournaments.

Keep reading GutshotMagazine.com for more updates on major poker tournaments in India, both online and live.