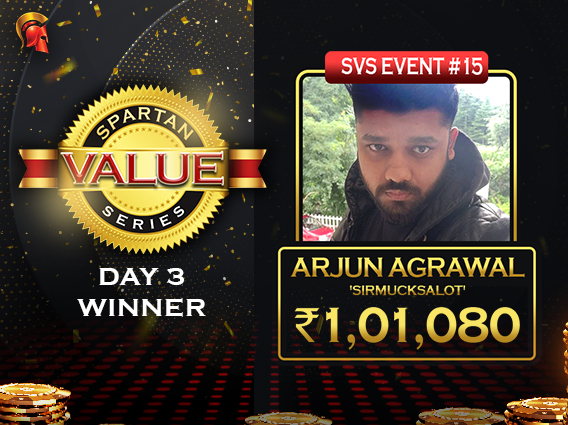 A new offering was recently launched on Spartan Poker called the Spartan Value Series (SVS) and like the name suggests, small and mid-stakes players can get a lot of value from this series, entering small and winning big. Yesterday was the third day of the ongoing series which promises an INR 60+ Lakh guarantee and five tournaments were scheduled for the day. Keep reading for a complete summary of SVS Day 3…

This re-entry add-on tournament had a buy-in of only INR 88 and a massive field was obviously expected. 421 entries turned out which contributed to a bigger prize pool of INR 33,680 which was eventually shared by the top 17 players with a min-cash of INR 528. Topping the field was ‘Ultra Nationalist’ and he bagged the biggest prize of INR 8,473 in this tournament which is a decent amount for those starting out in poker. He shoved with A3 in the final hand and got a call from ‘ZORIN5’ who had QT. The board ran dry, Ultra Nationalist won with A-high and the runner-up won INR 5,725 in prize money, playing from the FTRpoker platform.

The second tournament of the day had a bigger buy-in of INR 330 and here, a smaller field of 227 entries joined and eventually, only the top 17 were paid out with a min-cash of INR 1,029. The ultimate winner turned out to be ‘nanivjy’ who is having a great SVS series so far on Spartan Poker. Here, he bagged INR 16,800 in prize money after also having won a title the previous day. In heads-up, he beat ‘Grinderrr’ who won INR 7,525 for finishing second, playing on the FTRpoker platform.

A field of 427 entries registered to this mid-week afternoon tournament and as the tournament progressed, the top 31 of them were paid out, each receiving a min-cash of INR 440. The winner ‘zackhardy’ wished to stay anonymous but he was over the moon with this victory, earning the top prize of INR 10,575. As for the runner-up, it was ‘RENPEN’ who lost in heads-up, taking home INR 7,120 for his finish. Pairing an Ace on the flop of the final hand was enough for zackhardy to win the pot and emerge champion here!

INR 550 was what each entry paid up to play in the Prime Time tournament which has become a daily feature in this SVS series on Spartan Poker. 253 entries registered last evening and from them, the top 23 players received payouts of a minimum of INR 1,740 each. ‘TrainedToShip’ was good on the night and was well rewarded for it as well, winning the tournament and adding INR 34,875 to his poker bankroll. In heads-up, he got past ‘Novus’ after making the PFAI call with As4s and completing an Ace-high flush on the board in the final hand. Novus had to settle for INR 23,625 for second place.

Again, this was been a regular feature of the SVS series so far. Hi-Fi has been the final tournament on each day so far and here, 532 entries each paid the entry fee of INR 1,100 to take the prize pool all the way up to INR 5.32 Lakh. Arjun Agrawal aka ‘SirMucksAlot’ is a regular on Spartan Poker and he outlasted the complete field to bag the top prize of INR 1,01,080. Agrawal beat ‘InMyShadow’ in heads-up and the latter ended up settling for INR 73,150 for his runner-up finish. In the final hand, InMyShadow shoved pre-flop with pocket Sevens and Agrawal made the call with A2 and the latter hit a pair of Aces on the flop itself, which stood to win him the pot and the title.

For more updates from the ongoing Spartan Value Series, stay tuned to GutshotMagazine.com.

Don’t have an account on Spartan Poker? Check out their review page here, and don’t miss out on their bonuses, promotions, and guarantee-smashing tournaments. Sign-up now.
Tagged : Arjun Agrawal, Online poker, Spartan, SVS