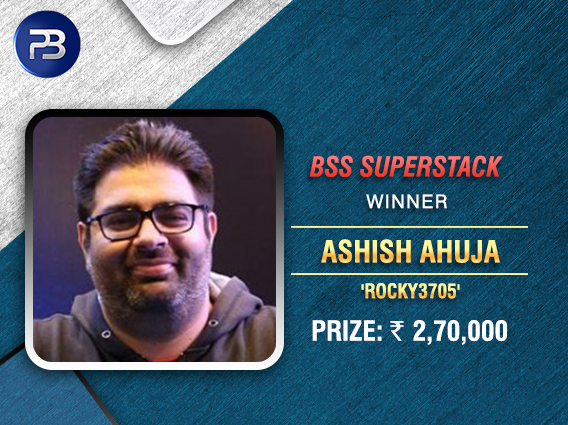 Do a little search for ‘Ashish Ahuja’ in Gutshot Magazine’s search box and you’ll find that this player has quite a few wins in the last month or so across all major platforms. Although he has been around the poker circuit since quite a while, the last couple of months have been highly profitable for Ahuja.

Playing under the name ‘rocky3705’ on PokerBaazi, Ahuja has been making quite a few deep runs in recent times, including one major victory coming when he claimed the Endeavour during the PokerBaazi Premier League a couple of weeks back. Last night, he was back in the action with another victory.

Baazi Super Sundays (BSS) is a weekly promotion that is contested every Sunday on PokerBaazi, where INR 25 lakh GTD is given away across three major tournaments. The biggest of these is the BSS SuperStack tournament and that’s the one Ahuja took down yesterday, beating a field that was packed with PokerBaazi regulars and pros from across the country.

With a buy-in of INR 5,500, the tournament kicked off at 7pm and it was not until 1:38am this morning that a winner was declared. 274 entries (including 99 re-entries) registered and from them, only the top 34 places were paid out with a minimum cash prize of INR 14,250.

All of these players would’ve been happy with their deep runs in this major PokerBaazi tournament, but none would be prouder than Ashish Ahuja himself, who was rewarded with the top prize of INR 2,70,000, adding another major title to his trophy cabinet. Keep reading GutshotMagazine.com for more updates on India’s top poker tournaments, both live and online.