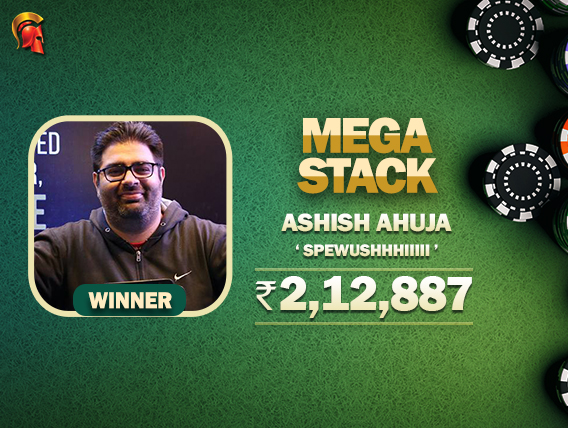 Here’s a player who has regular victories on various online poker platforms in India, especially on The Spartan Poker. Ashish Ahuja is a poker player who has several achievements in live as well as online poker, and he decided to add another title to his list last night.

Ahuja plays under the screen name ‘Spewushhhiiiii’ on Spartan and last night, he came out on top of a massive field to win their Tuesday night featured tournament called Mega Stack. As it does every week, the Mega Stack INR 12 Lakh GTD tournament kicked off at 7:30pm last evening and it was only a minute before 2am this morning that we had a winner.

The INR 3,300 buy-in tournament saw a total field of 419 entries and Ahuja ended up on top of this field, making a massive addition of INR 2,12,887 to his poker bankroll. He manged this slightly bigger prize than earlier expected as the guarantee was beaten, and a bigger prize pool of INR 12.57 was generated.

The top 39 finishers were paid out a min-cash of INR 8,673 and Ahuja took away the biggest prize of all, after a deal was made in 3-way play. He was up against ‘icmizer’ and the popular online grinder Bhanu Prakash aka ‘spectre’ and all three agreed on stopping play to take away prizes based on their current chip counts.

The final hand took place in Level #59 with the blinds at 35,000/70,000 – 7,000. Here icmizer won a small pot of 91,000 before the players agreed on the deal. icmizer took away the runner-up prize of INR 1,83,197 and Prakash, who had a relatively smaller stack than the other two players, won INR 1,46,059 for finishing in third place. Keep reading GutshotMagazine.com for the latest updates on Indian poker tournaments, both live and online.