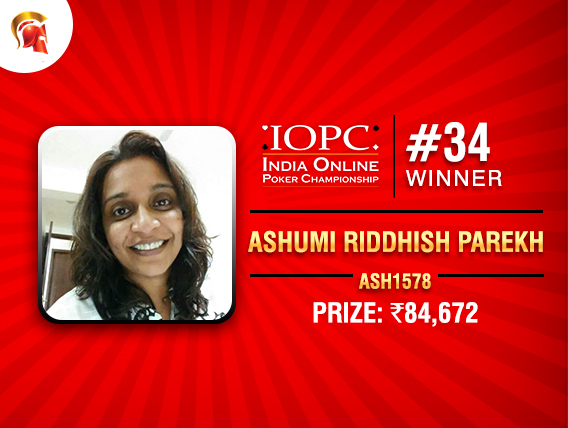 Day 7 of the India Online Poker Championship (IOPC) began with Loveleen Singh shipping the first tournament and Rohit Mishra shipping the second tournament of the day. Now, just three days are left in this cash-rich tournament series on The Spartan Poker, with a lot of cash prizes still waiting to be won.

She had a 2:1 chip lead going into what became the final hand of the tournament. isshhhh went all-in pre-flop with Q-4 and Parekh didn’t hesitate to make the call, with A-10. With the flop opening 7-10-9, Parekh took the early lead with a pair of Tens, but her opponent went ahead with queen pair when the turn opened Q. The river then opened A which changed things again and Parekh took down the title, with two pairs – Aces and Tens. isshhhh had to settle for the runners-up prize of INR 57,506.

Both players recorded their first heads-up appearances in the current IOPC and they’ll have to make many more appearances in the last 3 days of the series if they want to see themselves feature on the IOPC Leaderboard. A Jeep Compass, a Bajaj Dominar and other exciting prizes are up for grabs on this leaderboard.

Gutshotshot caught up with Ashumi Parekh after this win. She is a 40-yr old Mumbai-based poker player, who works in print and web design. “I started playing poker just for fun over 12 years ago. Over the last couple of years, I play everyday and am working on my game more seriously. I started with play money poker on PokerStars and Full Tilt. Once I learnt the basics of the game, I moved to real money,” she told us about her introduction to poker.

Talking about the tournament, she said, “I was in 3rd position when I got to the final table. I played very tight, waiting for specific spots as well as for the shorter stacks to bust. The heads up game didnt last too long.  I went in with A-Q which beat A-10 and that was that. I did enjoy a couple of suck outs but overall, I was happy with my game.” She plans to play a lot more and learn a lot more. Being a full-time poker player is her goal.