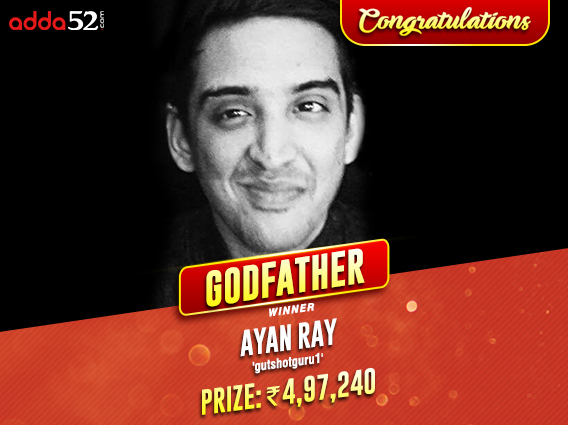 Adda52’s INR 20 Lakhs GTD Godfather X is a tournament series conducted every Thursday, currently in its 10th edition. The company is among India’s most leading poker websites and is known for various offerings to its loyal users. Owing to its popularity, the online gaming platform attracts a large field and a healthy prize pool.

The previous night saw a total of 401 registrations (including 149 re-entries) with a buy-in of INR 5500 to create a prize pool of INR 20,05,016. Eventually, the top 43 places received a paycheck of minimum cash of INR 11,028. After 8 hours of intense grinding, Ayan Ray aka ‘gutshotguru1’ emerged as the winner of the Godfather X tournament taking home enormous prize money of INR 4,97,240.

Ray beat Meherzad Munsaf aka ‘sailaway’ in heads-up battle, who settled for the runner-up title of INR 3,00,750. Ray is a frequent face in online poker tournaments, and this isn’t his first win. He has been adding multiple titles to his name.

Godfather X is a weekly tournament is Adda52 and will be hosted every Thursday for a total of nine weeks. At the finale SNG, the 9 Thursday survivors will sit for a Sit N Go tournament where the eventual winner will be awarded a fantastic opportunity to win a chance to play the Europe SNG. The SNG winner gets 9 Lakhs Europe Poker Package which includes 6.3 Lakhs towards tournament buy-ins and 2.7 Lakhs towards travel and stay.