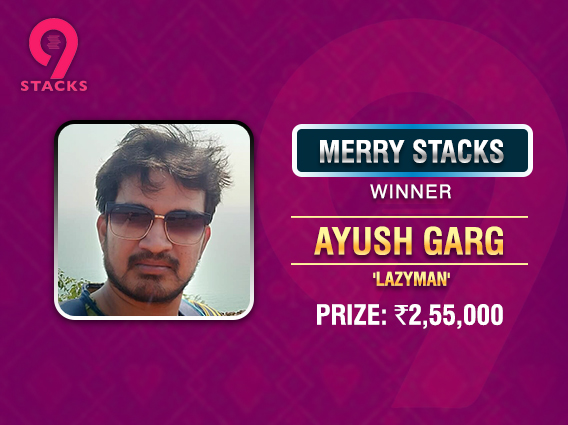 9stacks is a well-established platform among the Indian online poker scenario that offers huge cash prizes and conducts high-stakes tournaments and series all around the year, with their daily feature tournaments simply called ‘Stacks’ having a guarantee of INR 5 Lakhs each. They have also started the Prime Time Leaderboard Challenge recently and it will run till 30th December.

To celebrate Christmas 9stacks style, the platform hosted a tournament called INR 10 Lakhs GTD Merry Stacks, along with the Tuesday Stacks of INR 5 Lakhs GTD yesterday. The total field for Merry Stacks came to 239 entries (72 re-buys made). The tournament began on 5 pm yesterday on 9stacks and was in the books by 1:44 am today morning. The buy-in for the tournament was a reasonable INR 3,300. Eventually, the top 25 players received a pay-out, minimum cash being INR 9,000.

The player to merrily emerge victorious after an almost 9-hour grind in the Merry Stacks was Ayush Garg aka ‘lazyman’, taking home a wholesome amount of INR 2,55,000 as the 1st place cash prize. He defeated ‘inquiry’ in heads-up battle who took home INR 1,75,000 as runner-up cash prize.

Garg is a well-known player and has won significant amounts in the past, playing online on various platforms. He also plays live and has a few recorded cashes in Indian live tournaments. Beginning in 2017, he finished 23rd in the WPT India Superstack. Another one of his finishes was at the 2018 WPT India Superstack event held recently in Goa, finishing 12th for INR 1,49,500, where Abhishek Jalan shipped it. In the same series, he finished 72nd in the Main Event.

He is by no means new to the Indian scene, having grinded a lot online, but with this Merry Stacks win, he will be looking forward to play in more upcoming tournaments using his expanded bankroll.

Other regulars to rank in the money were Ashish Ahuja aka ‘HakoonahMatata’ (7th – INR 32,500) and Chandni Malik aka ‘maidumji’ (8th – INR 27,500). She has shipped significant tournaments online and being a woman in this male-dominated scene, we at Gutshot conducted an interview with her. Anirban Das aka ‘Pokernoob’ finished 13th for INR 12,000, also shipping Tuesday Stacks yesterday. Goonjan Mall aka ‘gmtesting’ finished 22nd for INR 9,000.

Keep reading GutshotMagazine.com for more tournament updates, announcements and general poker news from around the world.