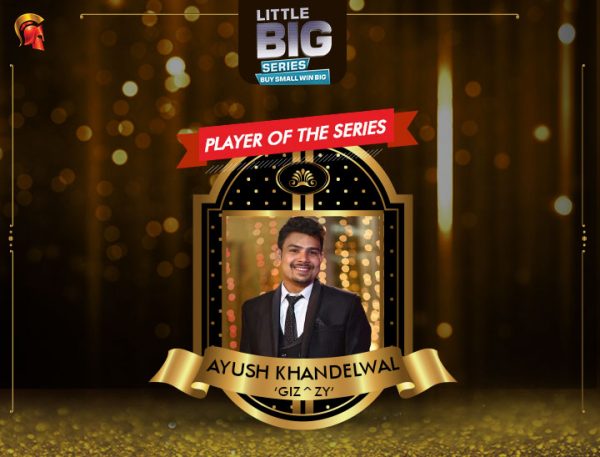 Ayush Khandelwal is LBS player of the series

The recent conclusion of Little Big Series (LBS) saw Ayush Khandelwal topping the LBS leaderboard for INR 50,000 and a ticket to the upcoming Millionaire and Two of a Kind tournament. Khandelwal plays under the moniker ‘Giz^zy’ who maintained the leaderboard top position all the four days of the series. Jaipur based Khandelwal has completed engineering from NIT Durgapur in 2013. Besides poker, he loves travelling, beer, hill stations, a foodie person.

Poker came to Khandelwal’s life when he was in the third year of engineering where he and his friend started playing poker on Zynga for like 8 hours a day. Soon, he and his friend started organizing poker tournaments in college where on Saturday night they had at least 30 participants with a buy-in of INR 50. After conducting many tournaments, Khandelwal graduated from the college.

But his poker story obviously doesn’t end there. The time span between joining the company after graduation, he had a sweet five months where he was introduced to 888poker and the site offered $8 on signup. Khandelwal started making multiple accounts to avail the free bankroll as he had no idea how to deposit or cash out from the site. From the very first account he signed up, he lost first free $8 and started creating more accounts totalling 6 of them in fact on 888poker and on the 7th account, Khandelwal went onto to run up that free $8 into $2,300! However the site blocked all accounts alleging that account is played from the same IP and to this day, his account remains locked.

From there Khandelwal moved onto the biggest international site i.e. PokerStars where he deposited $20 through Neteller and within a month he ran that up to $9,300 when he came first in an $11 buy-in tournament for $9,000. “This was the boom for me in poker and TheSpartanPoker was just emerging at the same time. I started playing cash games on other Indian sites as well. Mostly stakes of INR 10-20, INR 25-50 and was making a steady progress in those cash game sessions. At that time I was thinking of playing poker professionally and I did. For about three months I turned pro, just to check how good I am and how serious I can be about this profession,” said Khandelwal.

The best part is Khandelwal is playing poker full time since December 2017 and he is really satisfied with his performance as mentioned to Gutshot. When asked about the tough competitors on the LBS leaderboard, he said, “Everyone who was in the top 10 were in the race. But ‘bekhabar’ was the strongest among them. Apart from this, my future goals are to score big in more tournaments and if everything goes right, that day will be here soon! For now, I want to go Goa and Las Vegas to participate in the upcoming Deltin Poker Tournament (DPT) and World Series of Poker (WSOP).”

Speaking about TheSpartanPoker, he said, “I will say that they are the most innovative in terms of tournaments. They have started big tourney structures like IOPC, SSS, LBS etc. and good money if you score on the leaderboard. And what I miss in cash games is the 6-max tables, So I mostly stick to the tourneys on TheSpartanPoker.”

Our good wishes to young Ayush Khandelwal on his terrific performance and we hope he continues to grow in the sport in the coming years.