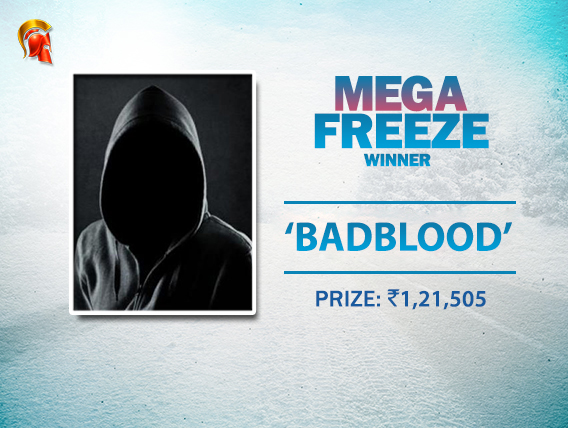 It is one of the most popular formats among tournament purists. A freezeout does not allow a busted player to rebuy or re-enter once he or she is eliminated. Monday’s popular freezeout tournament Mega Freeze takes place at The Spartan Poker and has a guaranteed prizepool of INR 6 Lakhs on offer. When the final hand was played out, it was ‘BADBLOOD’ who was standing tall claiming victory in this daily featured tournament of Spartan.

This INR 5,500 buy-in tournament got underway at 7:30 pm and by the time late registrations were done, there were 115 players taking part. 17 players from this field would take home a share of the tournament prizepool of INR 6 Lakhs with INR 9,420 being the assured min-cash to all. A couple of familiar names went deep in this tournament which included former India Online Poker Championship title winner from July ‘Bikini Babe’ who finished in 5th position for INR 44,280. That was followed by ‘Greko’ getting knocked out in 4th place for INR 54,900 by BADBLOOD. Both players hit a pair of Twos on the board but BADBLOOD’s Ace kicker proved to be the tie-breaker giving him that pot and further consolidating his chiplead.

The remaining players with BADBLOOD were ‘iliklikingbttns’ and Anant ‘Pro’ Purohit. These players played just two more hands before deciding to chop up the remaining prizepool as BADBLOOD (587k chips) led the way followed by iliklikingbttns (344k) and  Pro (217k). And that’s the order in which the prizepool was shared with BADBLOOD taking the biggest share INR 1,21,505 and also the title of this Monday Mega Freeze in the process. Runner-up prize of INR 1,04,558 went the way of iliklikingbttns and Pro scored INR 93,195 to round off the top three payout positions.

A good start to the weekday grind for these players as well as others who made it to the money and what a week it will be. We’ve got the Two of a Kind (2.o.K) coming up at The Spartan Poker on Sunday followed by the start of the Spartan Super Series from 8-14 October which promises a whopping INR 4.5+ Crores in guaranteed prizes. Also remember that the brand new iPhone XS is up for grabs across all days of this SSS edition for the players who make the most buy-ins during this series. Check out all the information about the SSS here.