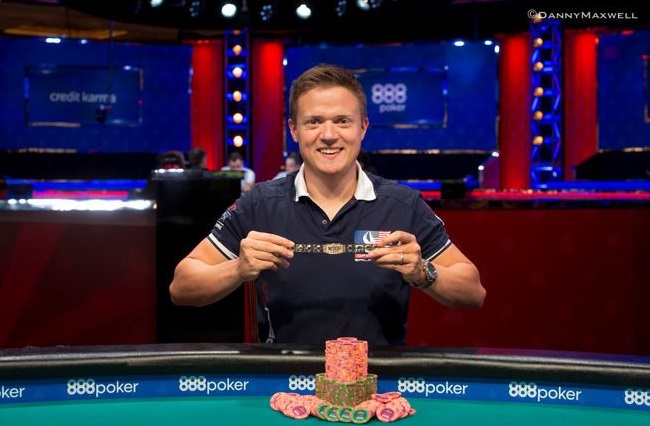 “I’m on top of the world right now,” said English poker player Benjamin Dobson after securing his maiden WSOP gold bracelet a few hours back. Dobson held the chip lead at the end of Day 3 of the 2018 WSOP Event #25: $1,500 Seven Card Stud Hi-Lo 8 or Better, with just three survivors remaining.

On Day 4, it didn’t take long before the third in chip lead was eliminated, while the second in chip lead took the runners up spot and Dobson claimed the title, winning $173,528 for his efforts. He played a total of 33 hours of poker before claiming the title, having beaten a field of 596 entries.

This turned out to be Dobson’s career-best live poker cash and he even crossed the $1 million mark in live poker cashes with this win, securing his first WSOP gold bracelet as well. It’s every poker player’s dream to win a WSOP bracelet and Dobson completed this dream today, winning a title in the stud 8 game, which also turns out to be his favourite format.

“I kind of had high expectations for myself, but it was also really tough because Timothy and Jesse are both probably better than me at Stud 8, so I felt like I was a bit of an underdog. But I managed to hold my own and ran good in some of the crucial parts, so I feel great,” he said after beating USA’s Tim Finne and 2-time bracelet winner Jesse Martin.

Many events carried on to the next day in the 2018 WSOP yesterday, which means a few bracelets will be given out, other than the won awarded to Ben Dobson. Keep reading GutshotMagazine.com for updates on all those WSOP bracelet events.