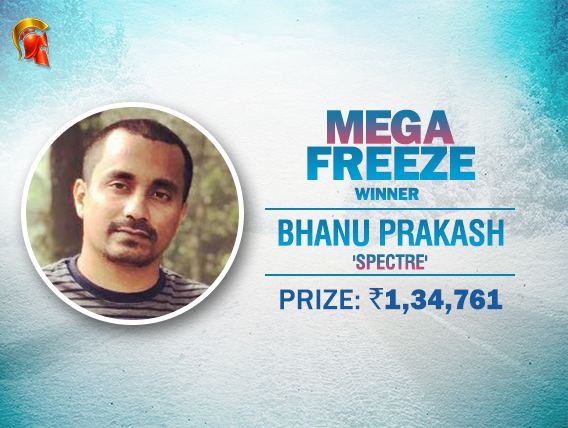 The Spartan Super Series (SSS) has recently concluded on The Spartan Poker but there’s no shortage of high-value tournaments on their platform, where a number of top players participate daily, particularly in the daily featured tournaments that have varying formats, buy-ins and guarantees.

Monday nights on Spartan are known for the Mega Freeze INR 6 Lakh GTD tournament, which is contested at 7:30pm IST. Yesterday’s Mega Freeze began as scheduled and ended by 12:55am this morning, when the final two players agreed on a deal to end the tournament, with similar prizes going to the two.

The INR 5,500 buy-in tournament saw a field of 126 entries and this led to the guarantee being passed slightly, where the top 17 places were paid a minimum of INR 9,891. The players who reached the end and agreed on a deal in heads-up were Spartan regulars Bhanu Prakash aka ‘spectre’ and Avadh Shah aka ‘Joka240’.

It was Level #38 of the tournament when they decided to reach this agreement, with the blinds at 4,700/9,400 – 940 and both players evenly stacked. Prakash was slightly ahead with 639,426 in chips as compared to Shah’s stack of 620,574. Prakash then won another small pot of 77k before they decided to put an end to the tournament.

Because he was ahead in chips, Prakash was declared as the winner, taking away INR 1,34,761, while Shah wasn’t too far behind, winning INR 1,30,846 for finishing second. Prakash is a very well-known player on Spartan, with plenty of cashes in the last few months, including an SSS title in August and winning July’s Cool Leaderboard Challenge.

Avadh Shah too, has a number of big wins on their platform, including winning the Sunday SuperStack in May and the most impressive of the lot being shipping The Millionaire for INR 25 lakh in August. Clearly, these two deserved to be there at the end yesterday as well.

Featured tournaments take place daily on The Spartan Poker and you can get updates on all of their major tournaments only on GutshotMagazine.com.