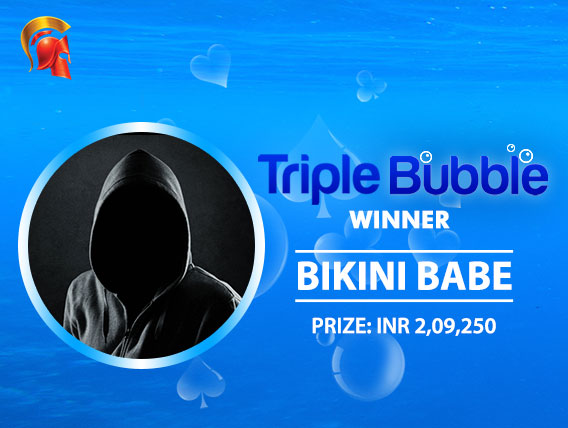 The most exciting thing about winning a poker tournament is being able to outlast a big field of players and of course the juicy prize money that’s available up top for the winner. On the flip side, one of the heartbreaking moments in a tournament is when you bust out on the bubble having put in the grind and ending up with nothing for the effort so close to the money. Keeping this in mind, The Spartan Poker introduced an innovative tournament recently called the Triple Bubble where players can get rewarded at the three different stages. Last night’s Triple Bubble winner was ‘Bikini Babe’ who claimed the title and top prize after a more-than-six-hour grind.

As mentioned earlier the Triple Bubble is unique in that it not only rewards the player busting on the first of three bubbles i.e. the notorious money bubble. In this tournament, the player will get his original (first) buy-in back at this point of elimination. The next is when the player makes the money but is knocked out before the final table. This player receives a free ticket worth INR 7,700 into Spartan’s signature tournament The Millionaire where top prize is about INR 25 Lakhs!

The last bubble payout is for the player who falls just short of the Triple Bubble title. This player gets not only a Millionaire ticket but also a free ticket worth INR 5,500 into the Two of a Kind (2.o.K) tournament where the top 2 finishers winning a fantastic INR 15 Lakhs each! So plenty to play for in this unique tournament at The Spartan Poker.

166 entries ponied up the buy-in to participate in the tournament which takes place every Friday evening. It came down to two of the regs in the heads-up match up. Anirban ‘pokernoob’ Das has racked up plenty of deep finishes and titles across various Indina online sites including some terrific runs at Spartan’s Destiny series where he won a Finale package worth INR 10 Lakhs to Las Vegas. The other player who has also made his mark in Destiny as well as being a title winner at the last held India Online Poker Championship (IOPC) is ‘Bikini Babe’. Given their solid resumes it looked like it would be a keenly contested battle.

However pokernoob had a 4:1 deficit and that lead proved to be a big mountain to climb. Barely a few hands into heads-up all the chips went into the middle in a preflop all in between pokernoob’s 7h 7d versus Bikini Babe’s As Jh. The latter hit hard on a board of Jc Ah 2c 3c 9h and with his two pair took down title and first prize of INR 2,09,250 while pokernoob got INR 1,41,750 and those two afore-mentioned signature tournament tickets.

Keep coming back to GutshotMagazine.com for more such stories from the world of poker!