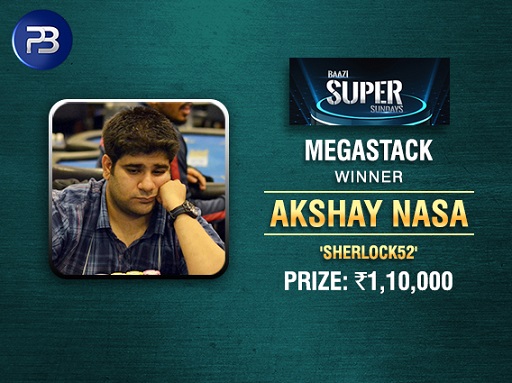 Just a while back, we reported news of Akshay Nasa aka ‘sherlock52’ shipping the Sunday SuperStack tournament on The Spartan Poker and taking away a massive prize in excess of six lakh rupees. It was also his 24th birthday yesterday and this win would’ve made the day more special.

However, he didn’t want just one title to celebrate his birthday. He was greedy for more and his poker skills gave him more, beating a tough field and shipping the INR 5 lakh GTD MegaStack tournament on PokerBaazi, which is part of their BSS (Baazi Super Sundays) promotion.

Every poker player would love to have birthdays like this, where you win not one, but two major online poker titles in a single night. This tournament kicked off at 8pm last night and wrapped up less than 5 hours later, at around 12:53am this morning. The tournament had a buy-in of INR 2,750 and a prize pool of INR 5 lakh, of which Nasa took home the top prize.

Nasa was awarded INR 1.1 lakh for this win, and he would’ve been ecstatic after having such a good Sunday. Gutshot had a word with him for the second time today, and he said, “I was shortest in the final 4 but gave a couple of beats to my friends to make a comeback. The toughest opponent among all was Chirag (‘miyagi’) who held the chip lead as well. I got lucky against his Ace-King, giving him a sick beat and won it from there.”

“Playing on the new PokerBaazi interface has been superb, and I am trying to win my ticket to the Aussie Millions Main Event. So, I’m grinding the full schedule since the competition started and yesterday was a sweet victory,” he said about the new PokerBaazi interface and his immediate plans in poker. Keep reading GutshotMagazine.com for more updates on the top Indian poker stories.