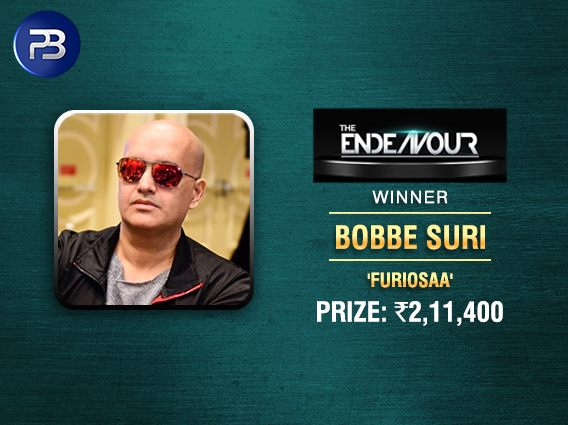 The Endeavour is a weekly tournament hosted by PokerBaazi every Tuesday at 8:00pm IST, guaranteeing players a total prize pool of INR 10 lakh. Yesterday’s tournament saw a total of 302 entries (195 unique + 107 re-entries) that helped bump up the prize pool to INR 10.57 lakh.

Standing tall at the end of this INR 3,850 buy-in tournament was none other than Bobbe Suri who plays under the name ‘Furiosaa’. He took home the biggest prize of the night, winning a sum of INR 2,11,400, while the top 31 places of the tournament were paid out a minimum prize of INR 10,570.

Suri is not an unknown face in the poker fraternity, having quite a few recognized wins under his belt. He also represented team PokerHigh, where he was known as the ‘Yoda’ of the team. Yesterday’s tournament went on for just a few minutes short of the 6-and-a-half-hour mark until 2:23am this morning and at the end of it, Suri was having the last laugh.

Suri has total live earnings of around $120,422 and his best live cash of INR 35 lakh came at the World Gaming Festival, Goa in 2011, where he topped the field and took home the trophy and the grand prize. He was also in Las Vegas recently, where he was one of five Indians to make it to Day 2 of the WSOP Main Event.

Gutshot caught up with Suri to ask him how he felt after this big win last night. He said, “PokerBaazi has always been a happy hunting ground for me. I won the INR 9 lakh Vegas package and now the Endeavour. Their new app is also kickass and comparable to the best in the world. I hope my good luck continues with the Baazigars :)”

For more updates on the biggest and best poker tournaments in India and across the world, keep reading GutshotMagazine.com.

Don’t have an account on PokerBaazi? If you wish to play and become the next big winner on their platform, sign-up now by clicking HERE.