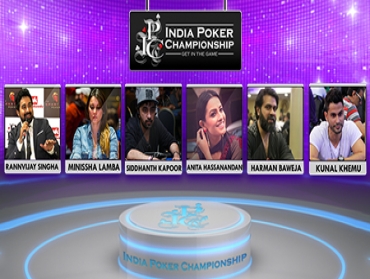 Bollywood Glamour at the upcoming IPC in Goa

The India Poker Championship (IPC) has always attracted a distinct crowd and set of players since it began its journey back in 2010. It is possibly seen as the most glamorous live poker tournaments in the country. Over the years, the brand unfailingly striven to give you the best playing experience, while also making sure they were up there on the glamour index too. Past editions of IPC have attracted a number of Bollywood celebrities as well so don’t be too surprised if you find yourself seated next to one in the September edition of the IPC which takes place at the uber-luxurious Big Daddy Casino in Panjim.

Celebrities and players alike will be drawn to this 5-day series which offers a magnificent 3 Crores in guaranteed prizes from 11-15 September. And speaking of Bollywood, quite a few actors are known for their fondness of poker. Case in point – Aamir Khan, Farhan Akhtar, Shahid Kapoor and others are known to play poker. In fact there are some Bollywood celebs who have even taken up the sport in a professional capacity and you could catch some of these stars at the IPC’s upcoming series… 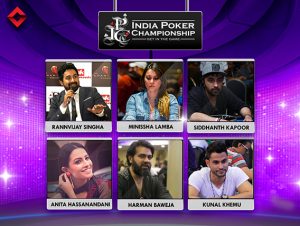 From Bollywood to Television

Probably one of the most well known celebrities on the poker circuit is actor Minissha Lamba. Having made her acting debut in 2005, Lamba has starred in a few famous Bollywood movies including Honeymoon Travels Pvt. Ltd. (2007), Bachna Ae Haseeno (2008), Bheja Fry 2 (2011) and others. Another notable onscreen stint was in the reality show Bigg Boss Season 8 which aired on Colors in 2014. All through that time, Lamba remained an avid poker player, making appearances in past editions of the IPC as well.

In recent years, she has taken her love for the game to the next level, travelling to locations like Las Vegas to be a part of the World Series of Poker (WSOP) too. She is also an Adda52.com Celebrity Pro and among her most recent achievements is a 2nd place finish in the WPT India Highroller in November last year, where she finished runner-up to Kalyan Chakravarthy for a career-best prize of INR 23+ Lakh. So definitely no slouch on the felts is this silver screen star.

Other known names from the film industry who love to play poker are Harman Baweja, Kunal Khemu and Sikander Kher who have frequented IPC events in the past and even done pretty well for themselves. Baweja, for instance, secured the runner-up position at the IPC 10k Freezeout while also making a deep run in the IPC 12k Head-Hunter in April 2011.  He also captained the Mumbai All Stars to victory in the inaugural edition of the Match Indian Poker League (Match IPL) which saw him go on to represent Team India at the International Federation of Match Poker (IFMP) Nations Cup in 2018.

But its not just the 70mm stars who love poker. The small screen and stars of the digital realm too have played and in fact made their mark in past editions of the IPC. Anita Hassanandani who is popular TV actor now having done shows like Yeh Hai Mohabbatein, Naagin 3 and others has regularly been involved with the mind sport of poker. She too was part of the afore-mentioned Mumbai All Stars team and was even brand ambassador for Poker Raj. Poker Raj named after its founder Raj Kundra and his wife Shilpa Shetty too are well known for playing poker with their Bollywood friends and were in fact taught the game by legendary Aussie spinner Shane Warne. Another known face of the small (and now digital) screen is Mukul Chadda, a former investment banker turned model and actor. Chadda even turned into a semi-pro back in the day when he was pursuing poker seriously. He won two titles at the India Poker Series in the 2010-11 season and was runnerup in the 20k Freezeout at IPC April 2011. Chadda was most recently a part of the Indian version of the popular American comedy ‘The Office’ which aired on Hotstar.

Another actor who has never shied away from his love for poker is Siddhant Kapoor, who is also known as DJ Bullzeye on the club circuit having spun the hits at top clubs and venues across the country. When not acting or producing music, he’s busy grinding away in online poker, having quite a few big scores too. Siddhanth hasn’t been to past editions of IPC as yet, but he could be one of the many from the Bollywood industry who turn up to the Big Daddy Casino. Another music producer, DJ, singer and composer who has visited the IPC in the past, has given us some of the biggest charbusting Hindi party tracks over the years. Yup, we’re talking about none other than Aqeel Ali or DJ Aqeel as he is more popularly known as, was spotted in the 2015-16 editions of the IPC and could very well be there for this comeback edition in September.

Other known quantities from different industries have also been part of IPC events like Nikhil Mehra. This popular designer who is one half of ‘Shantanu+Nikhil’ played and ended up as runner-up in a past 10k IPC tournament. Author, blogger and columnist Amit Varma has also been a regular visitor to the IPC having in fact turned pro for a couple of years. He is back to his writing full-time but there is every chance Varma will be there for the return of the IPC.

Continuing its long-standing association with the India Poker Championship is Spartan Poker who is presenting sponsor of the series as well as online satellite partner. Yes, you can win yourself a seat or multiple seats in fact, into the IPC by participating in these satellites for a fraction of the price. And talk of Spartan invariably leads to their brand ambassador Rannvijay Singha who has confessed his love for the game of poker in the past, calling it his guilty pleasure. 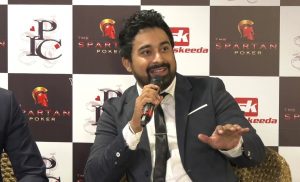 Rannvijay Singha has done a few movies in his acting career but is better known as the winner of the inaugural season of MTV Roadies, a reality show he went on to host over the next many years including the latest season called Roadies: Real Heroes which ended just last month. He has been associated with industry leader Spartan Poker and has actively advocated poker as a sport in the past. Rannvijay has also played a live poker tournament or two overseas, so we won’t be too surprised if he comes down to play a couple of events when the IPC kicks off on 11th September at the Big Daddy Casino.

We’re just a week away from the start of this poker extravaganza called India Poker Championship, which promises to be a lot of fun, like it always has been in past editions. For all updates on the series, stay tuned to GutshotMagazine.com.