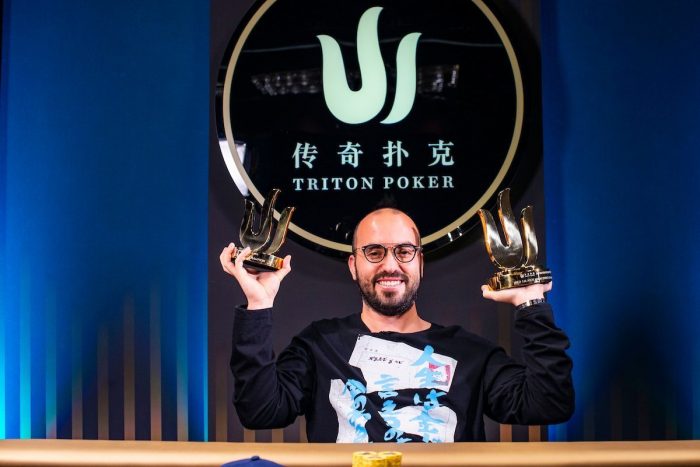 You just have to give in and agree that poker can only be a game of skill when you see some players winning so consistently, regardless of whether in online or in live poker tournaments. Here’s more validation for you – US pro Bryn Kenney’s recent run at the Maestral Resort and Casino in Budva, Montenegro.

That’s where Triton Poker decided to host their latest series called Triton Montengero SHR Series, scheduled between 5-17 May 2019. It was just a couple of days back that we reported Bryn Kenney winning Event #2 of the series and now, he has decided to go back-to-back and win another title, this time Event #5 HKD 1 Million Triton Montenegro Main Event.

He seems to love the Triton SHR series as his last title saw his bag $1.4 million and his third 7-figure cash in Triton tournaments. Now, he decided to take it one step ahead and score his fourth Triton 7-figure cash and his biggest so far, winning the Main Event for a massive pay-day of HKD 21,300,000 (~$2,713,859). His first and second Triton titles were just days apart and this one saw him competing with many ‘beasts’ of the poker world.

His winnings of $4+ million in the last week have ensured his career tally goes up to $34.8 million and he catapults up to #4 on the all-time poker earnings list, just half a million behind Erik Seidel at #3. Who knows, with a few days left in this SHR series in Montenegro, Kenney could definitely see another rise in the all-time list.

“I’m just going to chill, relax, let my brain relax. It’s now five days in a row thinking at a high level, so I need a few days to get back to normal,” said Kenney about the hectic last few days he has had, especially in this 3-day Main Event where he beat 75 entries (including 31 re-entries) to the title. Nine players shared the gigantic prize pool.