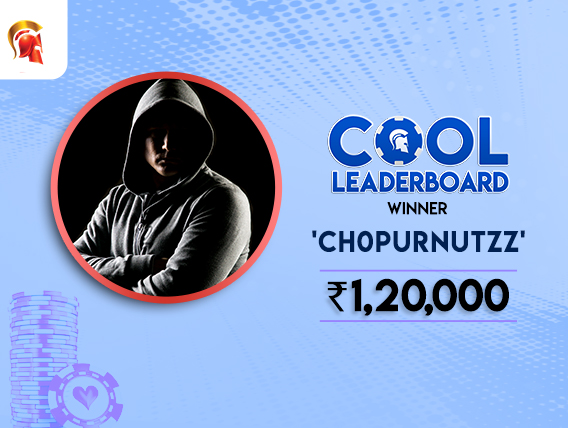 We are well into the month of October now and we reported news of Rajat Sharma aka ‘Garammasala’ winning the Hot Leaderboard Challenge and taking away the top prize of INR 4 lakh. It was a brilliant battle there with Sharma having to battle with some of India’s top pros to win that promotion, but the Cool Leaderboard turned out to be no less exciting.

The promotion depended on performances in the qualifying tournaments between 1-30 September and the player who turned out to be the most consistent of all was ‘Ch0pUrNutZZ’, whose constant finishes in the money in these tournaments gave him the top spot for an additional prize of INR 1.2 lakh for winning the Cool Leaderboard for September.

The player is a regular on Spartan but he wished to stay anonymous after he took down his promotion. He had to withstand competition from many other top pros, including Anirban Das aka ‘pokernoob’. Incidentally, Das also finished second in the Hot Leaderboard Challenge for September. Here, he won INR 60,000 for second place.