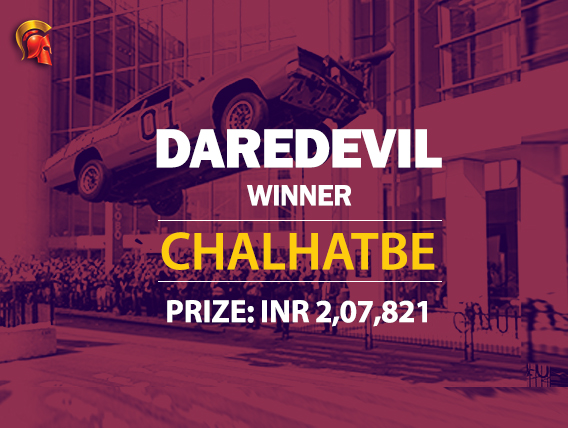 While the rest of the world parties on the weekend, there’s a different kind of party on for poker players. The DareDevil is this night’s featured tournament at The Spartan Poker and last night it was ‘chalhatbe’ who outlasted the field to claim top prize of INR 2,07,821.
The DareDevil is an INR 6 Lakh guaranteed tournament for a buy-in of INR 4,400 and it plays as a rebuy format. What’s different about this tourney is that players who bust out can re-enter for 50% of the original buy-in i.e. INR 2,000 which of course does not have the entry fee component to it. And so it was that 116 entries came together to drive that prizepool well past its guarantee to settle at INR 8,26,000. 17 places were paid out with min payout being INR 12,968. Runner-up of Friday’s Elite ‘PeterPunter’ a.k.a Siddarth Singhvi and Wednesday Electra winner Manish ‘thekid’ Lakhotia were also among the money finishers in this tournament but couldnt make the run to the title finishing in 16th and 13th place respectively.
After Lokimon’s exit in 3rd place, headsup battle was between Lokimon’s eliminator ‘hashtagme’ and chalhatbe. It was running neck and neck between the final two players with chalhatbe’s 950k only slightly behind hashtagme’s 1.2 million stack. The big chip swing came a few hands before the end when chalhatbe scored a big pot. He won over a million chips when he turned a set of Deuces against hashtagme. The tables then turned with chalhatbe now holding a 2:1 lead over his opponent. It was barely a few hands later that the final hand happened in Level 37 with blinds at 15,000-30,000-3,000. Raising preflop to 60,000 with Tc As, chalhatbe was then faced with the all-in of hashtagme (Kh 9h). The former made the call and Qs Kc 9c Qc Ac fanned out on the board. An Ace high flush on that board for chalhatbe as he claimed victory and hashtagme would have to let his payday of INR 1,40,420 console him.
There’s a high value daily featured tournament happening every evening at The Spartan Poker. If you don’t have a Spartan account, get one HERE.