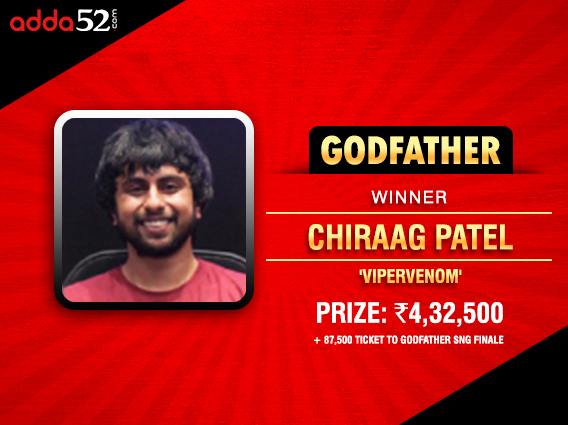 Most of the poker pros and enthusiasts from around the country are busy at the moment, travelling to Vietnam for the WPT and APT series, while the ongoing Baadshah Live Tournament is also taking place in Goa. However, for those who prefer to grind online from the comforts of their homes, there are plenty of tournament offerings available.

It was a star-studded final table, with a couple of India’s best players making it to heads-up of this popular tournament. Nikita Luther was one of the players who made heads-up, playing under the name ‘nikitaluther’. Everyone knows Luther as being one of India’s first female poker pros and more so for becoming India’s first female player to win a WSOP gold bracelet, also being the second overall to do so.

She was up against ‘vipervenom’ in heads-up who is none other than Chiraag Patel – a player who has several achievements in live as well as online poker. His latest big win was when he won The Flash on Spartan a couple of weeks back, while he also won the IOPC Big Daddy tournament in July and a title at the APPT Manila in August.

Here, Patel denied Luther the chance to win her first Godfather title. Luther had the lead and a big lead at one stage in heads-up but Patel managed to turn the tables and end up victorious, winning INR 5,20,000. From this, INR 87,500 would be deducted towards his ticket to the Aussie SnG Finale.

Luther won INR 3,30,000 for finishing second while Ashish Ahuja aka ‘rocky3705’ finished third, who was busy grinding on his phone from the Casino Pride in Goa. Keep reading GutshotMagazine.com for more updates on the top Indian poker tournaments.

Don’t have an account on Adda52 as yet? You can join their platform and be one of the big winners of the Adda52 featured tournaments, or any of their other top tournaments. To do so, sign-up HERE