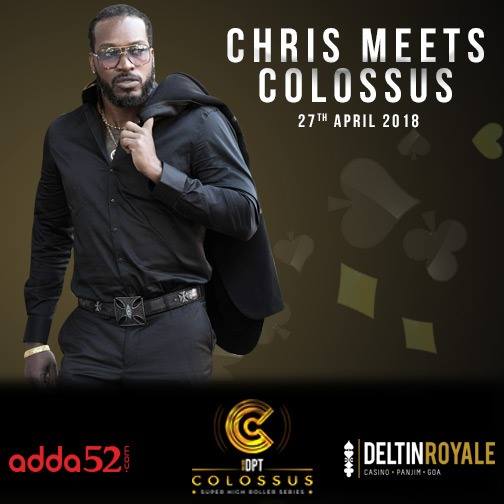 A Jamaican cricketer who burst on to the scene in 1998 as an attacking batsman, soon came to be known as one of the most destructive batsman of all time, holding a list of records, a few of which we will list down here:

This is Christopher Henry Gayle we are talking about. Someone who has entertained sports fans for nearly two decades and continues to do so, currently playing for Kings XI Punjab in IPL 2018. He is cricket’s ‘King of Instagram’, and his frequent posts on parties, alcohol and women have rightly led to him being known as the ‘Universe Boss’.

Gayle is also known to have a passion for playing poker and a recent announcement from leading Indian poker website Adda52, has confirmed that Gayle will be the brand ambassador for the upcoming Deltin Poker Tournament (DPT) Colossus that is scheduled to take place in Goa between 26th and 29th April 2018. The tournament series will have an estimated prize pool of INR 2 crore and some of the best poker pros from across the country will fly down to Goa, to be a part of the action at the Deltin Royale!

Gayle was dropped for KXIP’s first 2 games but made a grand contribution of 63(33) on return. After their match on 26th April, KXIP have a long break before their next match on 4th May. It is understood that Gayle will fly down to Goa during that time to make an appearance at the DPT Colossus and even play the INR 2 lakh buy-in tournament on 27th April.

Challenging participants to beat him in the tournament, Gayle said, “The storm hits DPT Colossus in Goa! Am I seeing you at DPT Colossus?” It will be interesting to see who can knock out the Universe Boss when he plays one of the five events of the tournament series. What are your predictions? Comment and let us know!

Keep reading GutshotMagazine.com for latest cricket news as well as poker news from around the world!