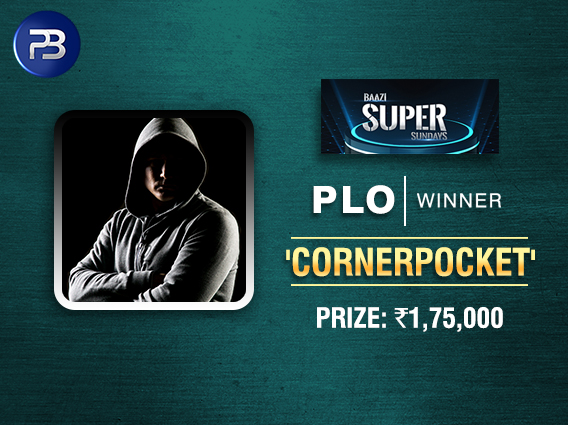 The top poker players in India wait eagerly for the Sunday grind each weekend. Here, all the major companies host high-guarantee tournaments, with plenty of prizes to be won for everyone. One such tournament was the INR 5 lakh GTD PLO tournament on PokerBaazi, which is a part of their BSS (Baazi Super Sundays) promotion.

The tournament has a buy-in of INR 5,500 and a total of 76 entries (47 players + 29 re-entries) took part in this Omaha tournament that kicked off at 6:30pm last evening. PLO may not be very popular in India, but the tournament still did well, while narrowly missing out on the advertised guarantee.

The tournament was over all before midnight, with the top prize going to ‘CornerPocket’, who outlasted these entries and was paid out INR 1,75,000 for this effort. Just seven players were paid out a minimum cash of INR 20,000 in this tournament, with popular player Rubin Labroo aka ‘kornkid’ finishing 5th.

CornerPocket would’ve enjoyed the rest of his Sunday night after this win, beating ‘Identity’ in heads-up, who won INR 1,05,000 for finishing second. Other known players who enrolled but couldn’t finish in the money include Varun Gulati aka ‘Vg_007’, Bobbe Suri aka ‘Furiosaa’, Akshay Nasa aka ‘sherlock52’, and Jasven Saigal aka ‘JasvenSaigal’.

The BSS PLO is part of Baazi Super Sundays, which also includes an INR 5 lakh GTD Monster 6-Max tournament and an INR 15 lakh SuperStack tournament. Stay tuned to GutshotMagazine.com for all updates on those tournaments as well.

Don’t have an account on PokerBaazi? If you wish to play and become the next big winner of their Sunday grind tournaments, sign-up now by clicking HERE.