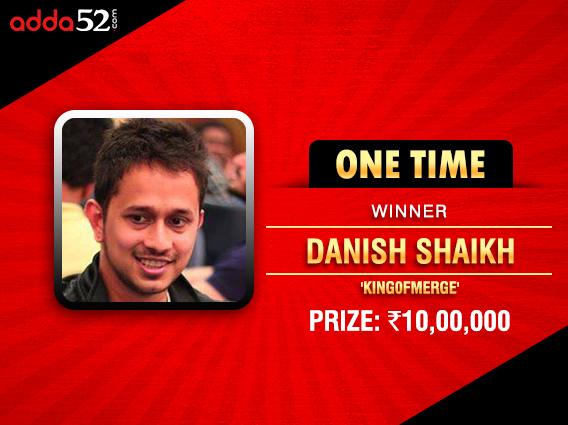 We’re here to report another big win for Danish Shaikh aka ‘King0fMerge’. For those who haven’t heard of this player, you clearly haven’t been playing enough of online poker in India. This is one of those players who has been winning loads of money in online poker, especially on Adda52.

Over the past few months and years, Danish Shaikh has picked up a number of titles on Adda52, including finishing runner-up and on the Final Table several times. Yesterday in particular was a brilliant night for the player, winning one of their signature tournaments, while finishing third in another.

Shaikh entered into the One Time tournament on Adda52 yesterday, a unique offering which promised to pay out the winner a prize of INR 10 lakh, while everyone else on the Final Table would be paid INR 1 lakh each. Clearly, no one would like to finish second or third in this tournament.

The tournament had a buy-in as low as INR 1,000 so Shaikh walked away with a profit of 1000x his buy-in, beating a massive field of 1,348 entries to win the second edition of the One Time tournament on Adda52. The first one was taken down by Ragesh Mishra in July this year.

Shaikh added a huge amount of INR 10 lakh to his poker bankroll with this victory, with the tournament beginning at 5pm yesterday and ending by 2:02am this morning. Later in the night, he also finished third in the Adda52 Millions where he added another amount of INR 2.65 lakh to his bankroll.

Apart from this victory, Shaikh has bagged the Adda52 Millions a couple of times in the past, while also winning the Godfather title, so he’s making sure he wins all of Adda52’s top tournament offerings. ‘rinodphilip’ was the unlucky player finishing in 2nd place yesterday, taking away INR 1 lakh, while Anurag Srivastava aka ‘13anurag’ also ended on the FT, going on to ship the Adda52 Millions later in the night.