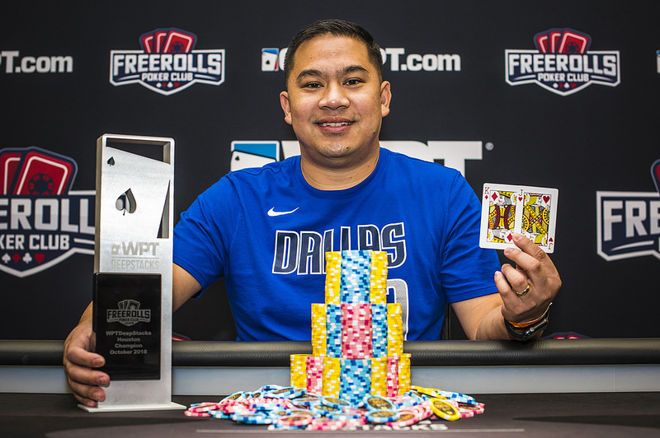 The World Poker Tour (WPT) is one of the biggest names in global tournament poker. Apart from the Main Tour, they have other tours as well, including the WPTDeepStacks, which has stops across USA and other countries as well. The latest WPTDeepStacks series ended in Houston, Texas.

We’re here to report a result from the most recent WPTDeepStacks Houston $1,000 Main Event, which has come to an end at the FreeRolls Poker Club. With just 4-5 live cashes prior to this tournament and not a single tournament win, Daryl Aguirre came over to Houston to change his fortunes.

He emerged victorious from among a massive field of 790 entries which created a prize pool of around $800k. After four starting flights and a total of six official days of play, Aguirre came out on top of this field to win a 6-figure cash of $143,765, which is his highest career cash by a long, long way. His total poker earnings before this was just around $16k.

“This is just so surreal, it’s just crazy. Three days, from Saturday all the way to here to actually win the tournament with this big buy-in and 790 entries, it’s just crazy,” said the ecstatic player after he took down the WPTDeepStacks Houston Main Event on Monday night.

At one stage, the player had less than 10 BBs left when play was down to around the final 20 players. However, he did brilliantly to chip up from there. Eventually, he beat countryman Jason Brice in heads-up who settled for the runner-up prize of $98,735.

Keep reading GutshotMagazine.com for updates on the biggest poker tournaments in India and around the world.