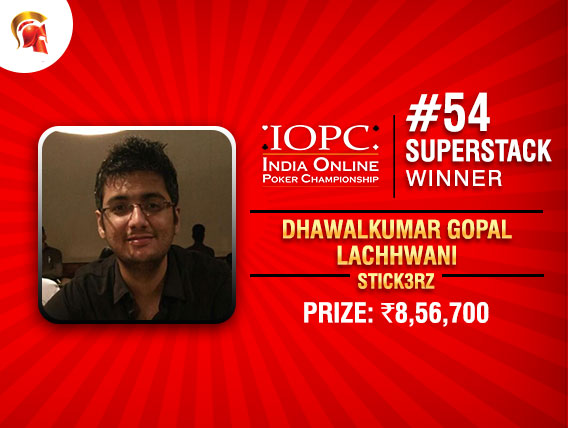 The increased guarantee was also beaten yesterday, with 659 entries registering to the tournament which kicked off at 7:30pm IST. The new prize pool of IOPC Event #54 Sunday SuperStack INR 30 Lac GTD (5500 RE) was INR 32.95 lakh and this was eventually shared among the top 60 players with a minimum cash prize of INR 13,180.

8 hours and 3 minutes is how long the tournament lasted, well past 3am IST by the time a winner was declared. The tournament had reached Level #55 with the blinds at 90,000/180,000 – 22,500 when Dhawalkumar Gopal Lachhwani won the final pot and took down the title for a massive prize of INR 8,56,700 for first place.

Playing under the username ‘Stick3rz’, the 27-year old MBA from Ahmedabad had a chip lead of nearly 3:1 when the final hand was played against ‘Spewushhhiiiii’. They went all-in pre-flop, with Spewushhhiiiii holding As Kh and Lachhwani holding JJ. Another J opened on the flop and his set of Jacks was superior to his opponent’s pair of aces, giving Lachhwani the pot and the title. Spewushhhiiiii took home INR 5,27,200 for second place.

Gutshot spoke to Lachhwani after this big win. He told us about his introduction to the game, saying, “I started playing in MBA college with friends for low stakes. I then quickly realised that there is logic and math involved, which made me fall in love with the game. I’ve been playing poker for stakes since 2016.”

Talking about the tournament itself, he said, “There were a few key hands. I had a decent stack when there were 15 people left, but Spewushiii called a bluff which left me massively crippled with 10BBs. I somehow managed to make it to the final table with 15BBs and knew I had as good a shot as anyone else. I turned that 15BB into a 30BB stack, and then I won a huge flip, where I 3-bet TT to a button open from SB, and the BB jammed on me. I made the call and my TT held against his AQ which gave me the chip lead.”

“The last 2 years have been amazing for me. I was a newbie in the poker world when I was picked by Pune Sharks during PSL Season 1. Raghav Bansal retained me for Season 2 which was an awesome feeling. I got to learn from sickos like Raghav, Gerald, Alan, Kartik and Sharad. Going forward, I would like to put in more volume, and hopefully will be take this up as a full-time profession,” he said on a parting note.

Keep reading GutshotMagazine.com for more updates from the world of poker!