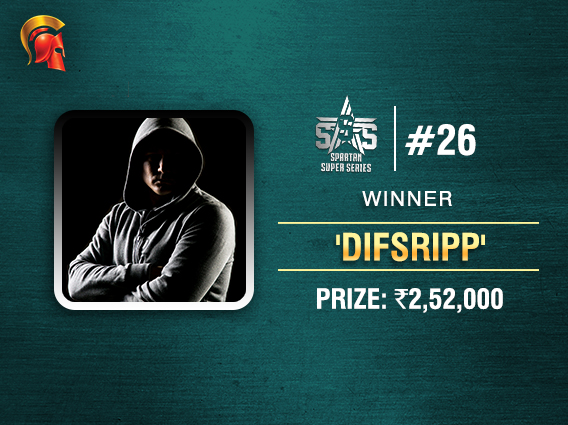 Day 5 of the Spartan Super Series (SSS) took place yesterday and it was as exciting as ever, with a total of 5 tournaments taking place during the course of the day. The fifth and final one to be hosted was none other than the Triple Bubble tournament, where there are not one or two, but three prize bubbles.

SSS Event #26 Triple Bubble INR 12 Lakh GTD was the last tournament to begin yesterday and by the end of the registration period, a total of 243 unique players had joined the event. With an INR 3,300 buy-in, the guarantee was almost beaten and eventually, 30 players shared the prize pool with a min-cash of INR 9,000 each.

Dominating the field on the night and emerging as the champion was ‘difsripp’, a player who was unbeatable in last night’s Triple Bubble tournament, winning and taking away the biggest pay-check of INR 2,52,000. He did so after beating another good player called ‘karanmangla’ in heads-up.

Now karanmangla has also been having a good time in online poker, especially in this SSS series. His consistent performances in the series have allowed him to end Day 2 as #2 on the SSS Leaderboard, only behind ‘Narammasala’, who also won a title yesterday.

Keep reading GutshotMagazine.com for more updates on the top Indian poker tournaments, both online and live.