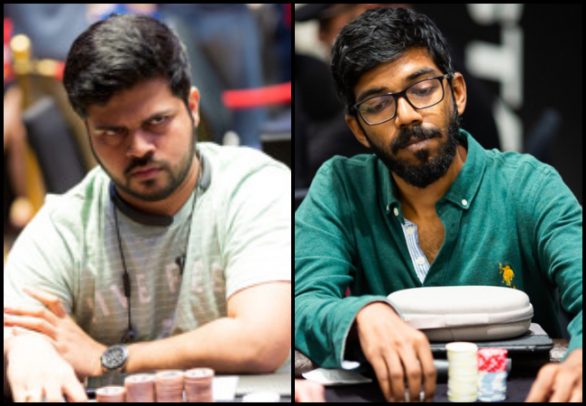 Doddapaneni and Sushant progress from EPT Sochi ME Day 1B

The 2nd starting flight of the ongoing PokerStars LIVE hosted European Poker Tour (EPT) Sochi RUB 191,800 Main Event went into the books yesterday. Out of the total 3 flights scheduled, the first one saw 3 Indians progress to Day 2. They were joined by another two pros, Aditya Sushant and Sriharsha Doddapaneni (pictured below in another event, left) from Day 1B.

The day attracted a total of 359 entries and at the end only 137 players progressed. Leading in chip counts was Viktor Ustimov with 305,700 chips. Among Indians, India’s first WSOP bracelet winner Sushant was leading early in the day.

Doddapaneni, who won the Spartan Destiny 7.0 Europe package, too was playing on the day and finished above Sushant with a workable stack of 128,500. Both Sushant and Doddapaneni had busted on Day 1A. Among Indians, Anant Purohit had the biggest lead with 79k chips but Doddapaneni became the leader after 1B.

Tathagata Sengupta, who had won an EPT qualifier on PokerStars India, was also running yesterday but got eliminated quite early in the day and couldn’t progress. Sushant, having finished 30th in the previous event EPT National, was in top from at the start of the. At one point, he had 100k chips after winning a big pot against Serhii Holodiuk but ultimately finished with a marginal stack of 53,300 chips, losing major pots in the last two levels.

Coming to the chip leader, Ustimov hails from Russia and is a fairly decent player with $700k plus live earnings to his name. He earned his best live cash of $173.2k in 2017 partypoker MILLIONS Russia HR as runner-up. He mostly plays in Russia and surrounding regions. Day 1A chip leader Aleksandr Denisov is still the overall chip leader with 498.6k chips.

Sushant and Doddapaneni will now join Purohit, Kartik Ved and Jayjit Ray in the Indian contingent on Day 2 which will be today starting 12 pm local time. Total of 306 survivors will be playing today in the ME. Keep reading GutshotMagazine.com for more such tournament updates from around the world.