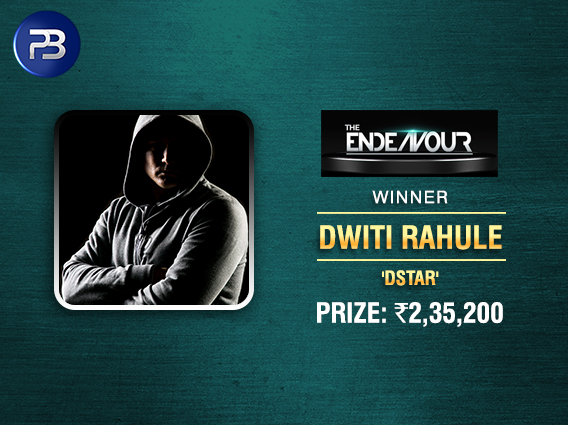 With the recent poker boom in India, we’ve seen a whole new segment of players entering the industry, but we’ve always noticed that the female participation in major online and live tournaments has been very low. However, it’s good to see that slowly changing in the last few months to a year.

India’s Muskan Sethi was appointed a PokerStars Team Pro a few months back while Nikita Luther became India’s first female pro to win a WSOP gold bracelet. Just a couple of days back, Shuchi Chamaria was one of seven players to qualify and progress to Day2 of the Baadshah Live Tournament in Goa.

Now, last night, we had another female poker achievement as Dwiti Rahule aka ‘Dstar’ went on to ship The Endeavour on PokerBaazi, which happens to be one of their most popular featured tournaments. While she is a regular on final tables on Baazi, this became one of her biggest victories, taking down The Endeavour INR 10 lakh GTD yesterday.

With a buy-in of INR 3,850, this tournament kicked off at 8pm last night and saw a participation of 336 entries (198 players + 138 re-entries) which beat the advertised guarantee and created a new prize pool of INR 11.76 lakh. This was eventually shared among the top 31 players with a minimum cash prize of INR 11,760.

The regular PokerBaazi pros like Sumit Sapra aka ‘boronyx’, Vinay B aka ‘Vinstill’, Goonjan Mall aka ‘gmtesting’, Rajat Mahajan aka ‘happyfish’ and others also finished in the money of this major tournament. The adds to the significance of the victory for Rahule and she will cherish this one for some time. She won INR 2,35,200 for winning the tournament after beating ‘neelu123’ in heads-up, who took home INR 1,73,460 for second place. Keep reading GutshotMagazine.com for more updates on top Indian poker tournaments.