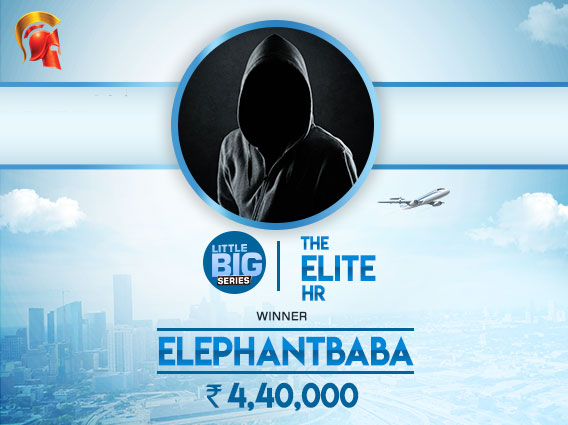 The popular festival of Ganpati got over less than a week back but it seems the elephant headed god continues to shower his blessings. This time around it was a player appropriately named ‘ElephantBaba’ who took down the ever popular Elite tournament at The Spartan Poker last night.

The Elite is the Friday night featured event at Spartan which boasts of 20 Lakhs in guaranteed prize money. Players are allowed up to two entries in this tournament which features a buy-in of INR 11,000. This week’s Elite is part of the ongoing Little Big Series (LBS) which started this past Thursday and offers a mouth watering INR 81 Lakhs plus in prizes to participating players. Needless to say that the Elite is one of the bigger tournaments on the LBS schedule and it drew in plenty of players both old and new to the virtual felts of The Spartan Poker. From the 197 participating entries, 27 players would finish in the money and a sum of INR 18,000 was assured all who made ITM.

‘icmizer’s’ elimination in 3rd place at the hands of Kartik Ved a.k.a ‘TheInternetKid’ brought this tournament into heads-up mode against ElephantBaba. The former was ahead with 2.4 million in chips against ElephantBaba’s 1.5 million stack. ElephantBaba managed to close the gap a little bit when he took down a pot worth 800k in a preflop battle where there was a raised and reraised. Making a power move on the flop of going all-in was enough to back down TheInternetKid on that one. The lead was still with the Kid but two pot which happened within a short span of each other and totaled over a million chips shifted the lead in favour of ElephantBaba. Not surprisingly the biggest and final hand of headsup took place just a couple of minutes later.

ElephantBaba holding (Td Jc) raised to 36,000 with the blinds at 12k-24k-3k and got a flatcall from TheInternetKid (7d 4d). The flop of 7c 8h 9s hit ElephantBaba hard and he put in a bet of 36k on the Kid’s check which again was flatted. The turn 4s was the worst possible card for TheInternetKid as he made two pair but ElephantBaba was going nowhere with his flopped flush. All the chips went into the middle on the river Ad and with the board not pairing up, that was the end of TheInternetKid’s hopes in this heads-up. A terrific win for ElephantBaba who claimed top prize of INR 4,40,000 while Kartik ‘TheInternetKid’ Ved would settle for INR 2,98,000 for his finish.

Another action filled day comes to an end at The Spartan Poker’s Little Big Series but stay tuned to GutshotMagazine.com for more news and information from the world of poker.