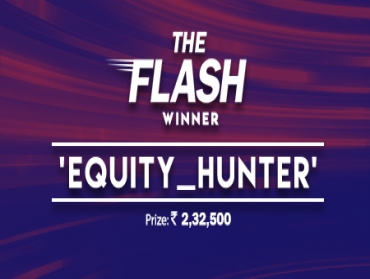 The virtual felts at The Spartan Poker have been abuzz with activity and the daily featured tournament just add to the sense of exciting poker action that players can expect on one of India’s top poker sites. Thursday evening’s The Flash tournament saw the participation of 162 entries and by the end of it all, it was ‘equity_hunter’ who was the last man standing claiming the title and top prize. 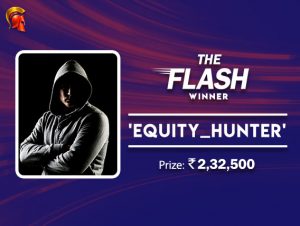 Kicking off at 7:30 pm, the Flash features a buy-in of INR 4,400 and follows a Re-entry format which means busted players, for a limited amount of time, can re-enter the tournament as a ‘new’ player. With a guarantee of INR 10 Lakhs in place for this tournament, it was an attractive proposition for any poker enthusiast to take part. 23 players cashed out eventually with INR 11,600 being the minimum assured payday for these money finishers. Plenty of online and Spartan regs took part in this tournament and many of those did pretty well for themselves.

Apratim ‘checm@te’ Sharma recently won a title in last month’s India Online Poker Championship (IOPC) and was looking like he will capture another. But while Sharma made the final table, he was also the first to get knocked out from the FT in 8th place for a score of INR 29,100. Another reg in Arjanveer Chaddha who plays as ‘instrumental’ also had a deep run finishing in 6th place for INR 53,500. An interesting thing to observe Sharma and Chaddha have both won an IOPC title as well as a DareDevil title in the recent past.

But the big money lies in the top 3 and in third place was ‘schemer77’ who got busted courtesy of equity_hunter. schemer77 was on the short stack but was significantly ahead with his Qs Ah against his opponent’s Qh Tc. But a board of 5d Kh 4c Jh 9h spelt doom and equity_hunter’s rivered straight knocked him out of this tourney at The Spartan Poker. And then it was time for heads-up which wasn’t a very long affair. equity_hunter held an almost exact 2:1 lead with a 1.22 million chip stack as compared to the 640k stack of his opponent ‘mobikwick‘.

Despite making a couple of moves and doubling up, mobikwick was unable to close the gap and in the final hand, he was more than happy to put it all into the middle with Kc Kd against equity_hunter’s As 9s. The river though was once again kind to equity_hunter with a board of 5d 2d Qs Ks Ts and his Ace high flush was better than mobikwick’s set of Kings.For the win, equity_hunter took home INR 2,32,500 and mobikwick won a sum of INR 1,57,500.

Stay tuned to GutshotMagazine.com as we bring you more such updates from the world of online poker.