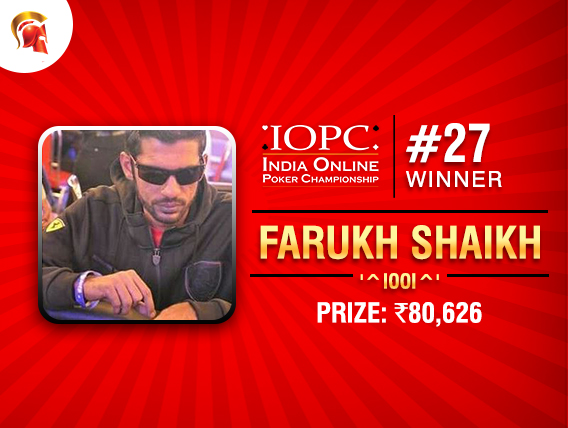 The cash-rich India Online Poker Championship (IOPC) is currently taking place on The Spartan Poker, where INR 7+ crore is up for grabs between 13-22 July 2018. Along with that, INR 30+ lakh is waiting to be won on the IOPC Leaderboard, where a Jeep Compass will be given away to the top finisher.

Yesterday was Day 6 of this edition of the IOPC and the day began with IOPC Event #27 INR 3 Lac GTD (550 R+A), which started at 2pm IST. The tournament saw 728 entries registering and this led to the guarantee being beaten and a new prize pool of INR 3.64 lakh being created.

The top 27 players were paid out in this tournament, with the minimum cash prize being INR 3,640. The biggest share of this prize pool went to Farukh Shaikh aka ‘^iOOi^’, who took home INR 80,626 for outlasting this big field and finishing first. This was the player’s first title of the series and hasn’t managed to make it to the leaderboard as yet.

He held Q-3 in the final hand and criminal held 8-10. With the flop opening A-6-10, criminal went all-in with a pair of Tens and Shaikh made the call. criminal had the lead and continued to hold the lead when the turn opened A. However, a Q on the river meant Shaikh took down the pot, with his Aces and Queens being superior to criminal’s Aces and Tens.

We caught up with the winner after this win. Shaikh is a 40-year old player from Mumbai, currently working in a call centre. He started playing poker 10 years ago, picking up the game from ZYNGA POKER on Facebook. He then began playing for real money around 8 years back.

Talking about this event, he said, “I registered for the event very late. In fact, just 34 minutes before the registration ended. Within 15 minutes, I had 4 times the starting stack, but then went busto in 3 hands. Then rebuy. After that, I kept scraping a lot of hands. The major turning point was when I called a bluff for 80k with bottom pair.” He also told us about his future plans for poker, saying, “LEARN….UNLEARN….and RE LEARN. Keep trying to improve myself.”

Keep reading GutshotMagazine.com for daily updates on the India Online Poker Championship and other poker updates from around the world.