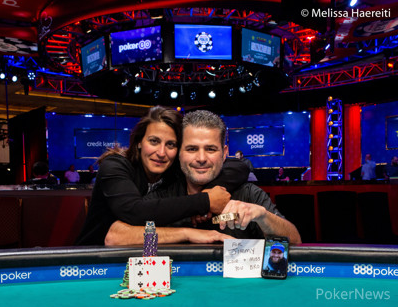 The 2018 World Series of Poker is on in full swing in Las Vegas and everyday, new winners are being crowned. Just a while back, we reported news of England’s Benjamin Dobson winning the Stud 8 event and his first ever WSOP gold bracelet. Now, USA’s Filippos Stavrakis has become the latest to win his maiden gold bracelet.

Just like Dobson, Stavrakis also held the chip lead at the close of play yesterday, in Event #26: $1,000 Pot-Limit Omaha, with the final 14 survivors of the original 986 entries coming out to play today. Stavrakis lost the chip lead initially but did well to recover and claim his first live poker title, highest live cash and first gold bracelet.

He won $169,842 for this effort and he will be mighty proud of this achievement, given that his previous best was just $30,035 he won for finishing 6th in a WSOP Circuit event last year. He beat Jordan Siegel in heads up, while Brazilian pro Felipe Ramos would’ve been his major competition on the final table. There were no previous bracelet winners on the table, so a new winner would’ve been crowned anyhow.

The flop opened 4d-7s-Kd and after Siegel’s initial bet of 320,000, Stavrakis went all-in and the former called. Stavrakis revealed Ad-7d-7c-4s, while Siegel revealed Ac-8d-6d-2d. Stavrakis was miles ahead for the flush draw and with the turn and river opening Qh-10h, it was a three of a kind sevens that gave Stavrakis the pot and the title.

After winning the title, he mentioned that is was dedicated to his brother, who passed away. “A couple years ago we lost my brother prematurely and I always said that if I was fortunate enough to win a bracelet I would dedicate it to him. It felt like he was with me all day.”

GutshotMagazine.com is doing a daily roundup of all major events at the 2018 World Series of Poker, so stay tuned for similar tournament results from Las Vegas, as well as other parts of the world.