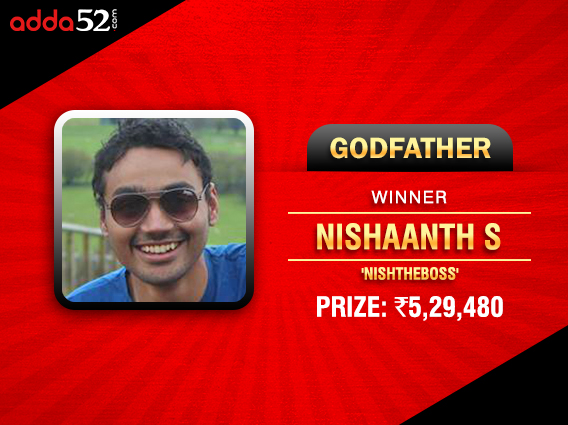 Seems like wininng the Destiny and bagging a chance to go to Europe wasn’t enough for Shanmughasundarm. This win has increased his chances to go abroad by two-fold. Both these wins have made a very good start to his year, but if he even goes on to win both SnGs, which is not a far fetched idea since he’s been playing phenomenally in the last couple of months, it will be an occassion on its own.

Coming back to the Godfather, it is one such regular tournament among a handful which offers a chance for players to experience playing poker outside India. The present Godfather series is the 7th edition, where the winner gets a chance to play in a Vegas SnG. The winner of the SnG will get to visit the poker capital, Las Vegas, with an INR 9 Lakhs package.

This is very beneficial especially to young and budding players who are looking to make a mark in the industry as it provides with an opportunity to connect with the larger community worldwide too. Adda52 has done a great job for the community throughout its long career and is currently ranked among the tops in the industry.

Yesterday’s Godfather attracted a huge field of 427 entries and the prize pool ultimately resulted to INR 21+ Lakhs. Shanmughasundaram , playing under ‘Nishtheboss’ on Adda52, beat a tough field and especially a tougher Final Table to become claim the Godfather title and 1st place cash prize of INR 5,29,480. He has now bagged two chances to play abroad. If the Destiny Finale SnG on 27th January fails him, he can still play for the Vegas package in the Godfather Finale SnG on 3rd March 2019. Shanmughasundaram must’ve already started his preparation in going full steam ahead to Vegas or Europe or both!

In heads-up, Shanmughasundaram beat Srihari Bang aka ‘zombieballs’ to secure his victory. The runner-up put up a tough fight but had to settle for INR 3,20,250 as 2nd place cash prize. The final hand saw Shanmughasundaram with 6s 7c and Bang with 6c 8s. The board revealed 7d 6h 6d Jc 10s and the eventual winner made a full house, beating Bang’s lower hand of trips.

We spoke to Shanmughasundaram after his win and he was on another level, securing two chances to play live abroad. He said, “It feels pretty special to ship Destiny and Godfather, two tournaments with big fields and tough Final Tables. Also, I’ve increased my chances to play live abroad, which I’m looking forward to.” It wouldn’t be surprising to the community if the champion ships a few more tournaments along the way

Out of the 43 paid places, some of the notables to rank in it were Kartik Ved aka ‘Pegasus1505‘ (11th), Rajat Sharma aka ‘Oshoswami‘ (19th), yesterday’s IOPC Flash winner Deepak Bothra aka ‘bothras’ (30th), Vikash Khaitan aka ‘Vikinse’ (37th) and Manoj Pentakota aka ‘thatsmymoney’ (42nd).

Keep reading GutshotMagazine.com for more tournament results and for general poker news from around the world.