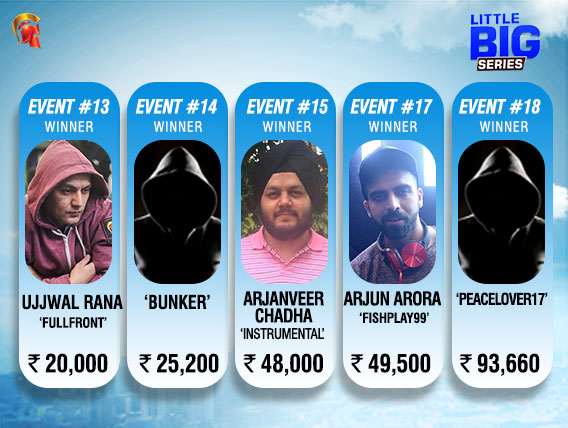 Yesterday was the final day of the Little Big Series (LBS) Special Edition, with six scheduled tournaments still to take place. Apart from the usual Sunday grind high-value tournaments, LBS tournaments were also taking place. We reported Abhishek Rathod winning the LBS Main Event and now, we’ll bring you updates on the other tournaments that took place on LBS Day 4.

The day began with this INR 440 buy-in tournament kicking off at 12pm. 246 entries registered to the tournament and from them, the top 21 were paid out a minimum cash prize of INR 1,000. The player topping them all and taking home the biggest prize of INR 20,000 was Ujjwal Rana aka ‘fullfront’, who emerged victorious after beating Vivek Bajaj aka ‘doodh_bhaat’ in heads-up, who had to settle for the second-place prize of INR 14,000. A pair of Tens won Rana the final hand, in Level #35 with the blinds at 10,000/20,000 – 2,000.

The next tournament to take place was the Sunday Mini, which had a buy-in of INR 550 and kicked off at 2pm. The guarantee was ever so slightly beaten with 252 entries registering to the tournament and eventually, the top 36 from them were paid out, with a min-cash of INR 819. Coming out on top of this field was ‘bunker’ who added an amount of INR 25,200 to his poker bankroll. This happened after he beat ‘monu2309’ in heads-up, having hit a straight in the final hand. monu2309 won INR 17,640.

This tournament began at 4:30pm and it ended with two extremely skilled poker players fighting it out for the title. With a buy-in of INR 1,100, 149 entries registered to the tournament and 21 of them were paid out a min-cash of INR 2,500. The heads-up battle was between Arjanveer Chadha aka ‘instrumental’ and Bhanu Prakash aka ‘spectre’ and both these players have several online poker achievements. Chadha took down the title and the top prize of INR 48,000 while Prakash had to settle for the runner-up prize of INR 32,500.

This tournament kicked off at 8pm, a couple of hours after the Main Event began. It had a buy-in of INR 990 and by the end of the registration period, there were 216 entries. The top 27 of them took away prizes of a minimum of INR 2,025 each and the player who took home a biggest chunk of this prize pool was Arjun Arora aka ‘FishPlay99’, who won INR 49,500. Remember, this player also won the Sunday SuperStack on Spartan last Sunday. Yesterday, he beat ‘WALAO’ in heads-up, who won INR 33,525 for finishing second.