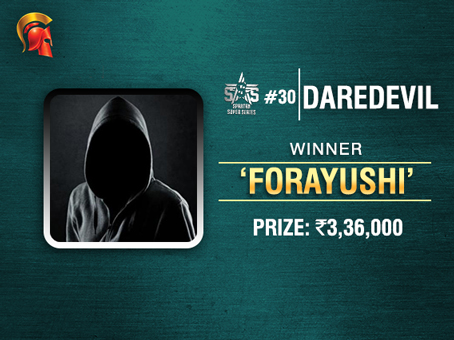 One of the most awaited tournaments of the weekend is the DareDevil at The Spartan Poker, one of the daily featured tourneys on the site. The DareDevil allows busted players to re-enter at 50% of the buy-in and that makes it an attractive proposition for players to take part in this 10 Lakhs guaranteed event. More participation than usual was expected as this tournament was also part of the ongoing Spartan Super Series (SSS) schedule. No surprise then that last night the prizepool figure got bumped up to 12 Lakhs as a result of 111 entries taking part and it was ‘ForAyushi’ who claimed top honours by the end of an almost six hour long grind.

A prizepool of 12 Lakhs in this tournament was being distributed by the top 15 money finishers with a min-cash amount of INR 22,800 going each of their way. Plenty of players who have been doing well online and in this ongoing SSS series ran deep such as Anirban ‘pokernoob’ Das, Arjanveer ‘instrumental’ Chadha, Ashish ‘Bikini Babe’ Munot, ‘The Showdown’, ‘Exhaust’ and many others. However all of them busted just out of the money. Among those who did make it to the money was Ankit Wadhawan a.k.a ‘d00mtr00p3r’ who had in fact won a title in the August edition of the SSS. This time around he fell short, still finishing an impressive 6th for a payday of INR 60,000. His exit was followed by those of Vinay ‘Dhanraj Seth’ Chaudhry (5th for INR 75,000) and Apratim ‘checm@te’ Sharma (4th for INR 1,05,000) and soon enough it was time for headsup.

The final battle for the title was between a well known reg in Anurag ‘InvestmentBanker’ Srivastava and ForAyushi. Srivastava has won tournaments like the Mega Stack and Big Daddy on Spartan in the past and he would have fancied his chances at the title given his past experience. His stack of 1.1 million chips was not too far behind the 1.6 million chipstack of ForAyushi when heads-up began. Both players were really keen on taking it down and that translated to a longish heads-up match. Towards the end of it, InvestmentBanker wrestled the lead back with a two pair of Jacks and Fives against the Fives of ForAyushi. That lead was lost in the very next hand when ForAyushi turned a straight against the two pair of InvestmentBanker. Four hands later it was all over as ForAyushi (Td 8c) scored a full house on a 8s 8h Kh 7c Tc board against the straight of InvestmentBanker (9s 6s).

For the win, ‘ForAyushi’ took home top prize of INR 3,36,000 while Anurag Srivastava makes another top score of INR 2,19,000 for his runner-up finish. Congratulations to the money finishers in this featured SSS event as we head towards the final event round-up from this penultimate day of action at the Spartan Super Series.