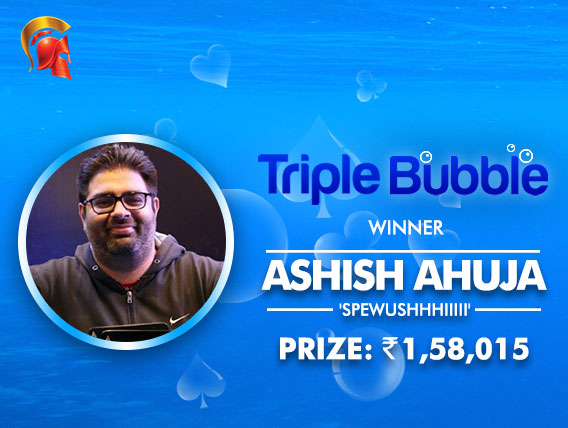 If you are a poker player in India, you have to have heard of these two players called Arjanveer Chadha and Ashish Ahuja. Friends off the felts, these two often post on social media when they make deep runs in online poker tournaments together, talking about how they narrowly missed playing heads-up against each other.

However, the wait ended last night. While Chadha has a massive trophy cabinet of online poker victories and Ahuja himself has been winning plenty in recent times, yesterday they managed to both run deep enough to play each other in heads-up. This happened in last night’s Triple Bubble INR 7.5 lakh GTD on The Spartan Poker.

The tournament is a weekly one which is contested at 9pm on Friday nights and yesterday, a total of 270 entries paid the buy-in of INR 3,300 to be a part of this unique tournament, which has not one or two, but three prize bubbles. Even the guarantee was passed, creating a new prize pool of INR 8.1 lakh.

23 players from this field were paid out with a minimum cash prize of INR 9,396 and plenty of regulars were a part of this tough field. Among them were Sahil Agarwal aka ‘Nasheyy’ (19th), recent SSS Super Highroller winner Rohit Mishra aka ‘ShippingYard’ (14th), Anant Purohit aka ‘Pro’ (10th), Goonjan Mall aka ‘gmtesting’ (6th), Sagar Choudhury aka ‘Strangeplay’ (5th) and Sumit Sapra aka ‘mrgr33n’ (4th).

Once they got through this tough field, Chadha and Ahuja got to heads-up against each other and we’re pretty sure they would’ve agreed to even out the chip counts and take away equal prizes among the two. However, technically, Ahuja ended victorious in last night’s Triple Bubble, slightly ahead in chip counts when the deal was struck.

Both having around 1.3 million chips in play in heads-up, they called the deal in Level #45 of the tournament, with the blinds at 9,800/19,600-1,960. The tournament came to an end at 3:39am this morning. Ahuja was awarded INR 1,58,015 in prize money, while Chadha took away an almost exact figure for second place – INR 1,57,884. Just a while before this tournament ended, The Elite also ended with a chop, being split between Neeraj Kumar and Rubin Labroo.