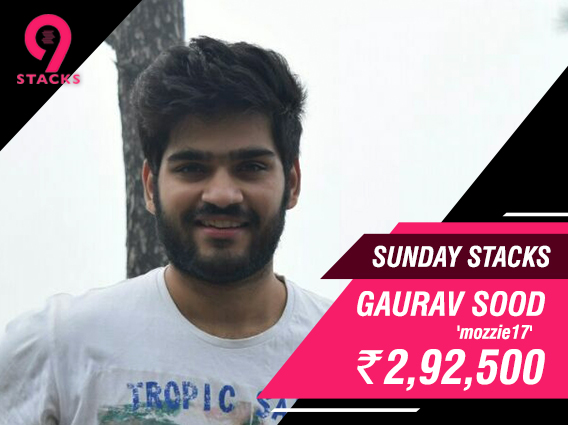 Every Sunday, every major poker website in India hosts some of their best offerings, given that the day is a work-off and hence many players have time to indulge in their poker passion. One such company called 9stacks hosted Sunday Stacks INR 15 Lakhs GTD this Sunday. This is one of the company’s offerings that regularly gathers a healthy turn-out.

The tournament started at 8 pm and had a buy-in of INR 5,500. Gaurav Sood aka ‘mozzie17’ who is a known online regular, won 9stacks’ biggest weekly offering last Sunday. He bested a tough field to ship the tournament. Sood took home INR 2,92,500 as the first-place cash prize after beating ‘Jon$now’ in heads-up. The runner-up settled for INR 1,91,250.

Sood is a budding player who hails from Gurgaon. He has a few deep runs in past events online on various reputed platforms like Spartan, PokerStars India, and others. Among his title wins include Spartan Mega Stack, winning it twice in successive months last year. This year saw him ship PokerStars Super Tuesday for a good amount. On 9stacks, he won the Wanderers tournament just a couple weeks back.

He is a player who has been consistent lately and as a result many eyes are fixed on him. He will be hoping to make a decent conversion of this hard-earned money into some wins in coming days and it won’t come as a surprise if he does so.

We spoke to Sood and he commented on his run, saying, “I’m happy with how I played and it fared well as the poker gods showed mercy as well. All these victories push me and make me hungry to explore the game and being a better player today than I was yesterday.“

Coming to the company itself, 9stacks had received major funding from a VC firm and seems like they are finding good use for it. They have recently updated their weekly tournaments, with new cricket-themed offerings like Wankhede, Oval, Wanderers, Gabba, Eden HR and Lord’s PLO from Monday to Saturday respectively.

They have hosted some popular promotions on its website like Happy New Year in the past and more recently the ‘Take Off 2 Vegas’ promotion. Keep reading GutshotMagazine.com for more such tournament roundups and results and for general poker news from around the world.