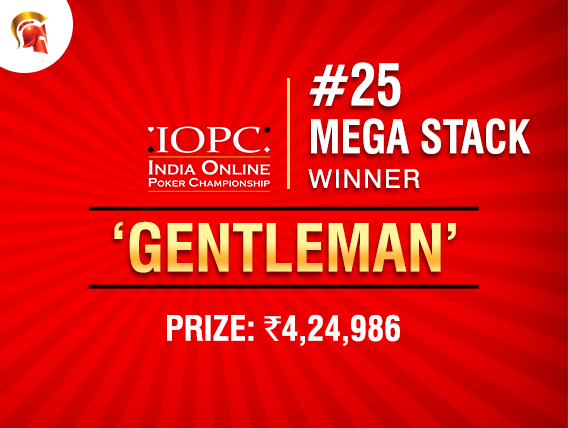 The Spartan Poker hosts featured online poker tournaments every day of the week and yesterday being a Tuesday, the Mega Stack tournament was hosted. Since the India Online Poker Championship (IOPC) is currently going on, the guaranteed prize pool of the tournament was increased to INR 20 lakh.

Even after the raise in this prize pool, the guarantee was still beaten as a total of 734 entries registered to IOPC Event #25 Mega Stack INR 20 Lac GTD (3300 RE), which began at 7:30pm IST. This participation took the prize pool up to INR 22+ lakh and the top 71 players were paid out a minimum cash of INR 8,368.

7 hours and 40 minutes is how long this tournament took before a winner was crowned. It was ‘Gentleman’ who shipped the tournament, beating this massive field to take away a pay-check of INR 4,24,986. The player wished to stay anonymous after this big win, but we’re sure he’s extremely delighted at the moment.

The Mega Stack was the biggest tournament of the day and it took quite a while for the winner to be declared. We were down to Level #71 of the tournament when the final hand was played, with the blinds running at 80,000/160,000 – 16,000. By this time, Gentleman was able to build a chip lead of 14:1 in heads-up.

His heads-up opponent was ‘ladyluck999’, who was trailing and decided to go all-in pre-flop with 10-K. Gentleman had a mighty stack and made the call with no hesitation, holding Q-9. The board opened 9-5-J-7-3 and Gentleman hit a pair of Nines immediately, while ladyluck999 didn’t improve, allowing Gentleman to win the pot and an IOPC title. ladyluck999 still took away a decent prize amount of INR 2,67,763.

Check out the IOPC Leaderboard after Day 5: 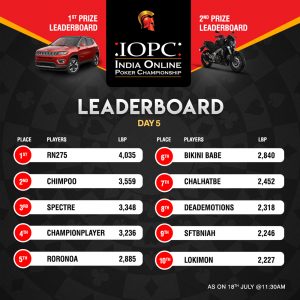 Keep reading GutshotMagazine.com for updates on all the 55 scheduled tournaments in this edition of the India Online Poker Championship.