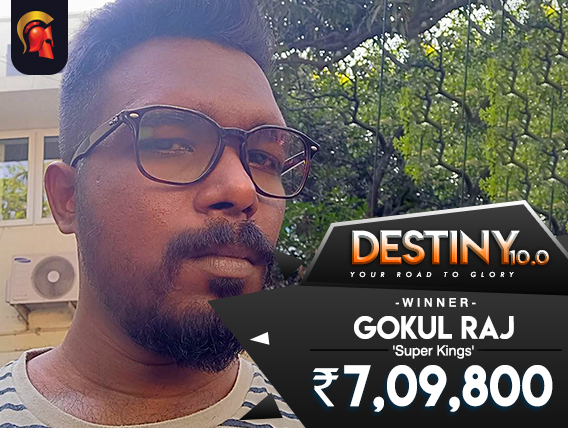 Arguably the most popular featured tournament on Spartan Poker, Destiny has grown as a tournament series from its first run a couple of years back to Destiny 10.0 which just crowned it final champion last night. Destiny INR 20 Lakh GTD usually attracts a massive field, but last night was even better than the usual on Spartan!

With a buy-in of INR 5,500, this Wednesday night tournament attracted a huge field of 546 entries yesterday, absolutely smashing the guarantee to create a new prize pool of INR 27.3 Lakh. The tournament kicked off at its usual time of 8pm and as the tournament progressed, the money was distributed among the top 50 players with a min-cash of INR 13,650.

This winner was Gokul Raj who plays under the screen name ‘Super Kings’ on Spartan Poker and a pro who has taken down many major titles on this platform in recent months. Here however, he was the biggest benefactor of the increased prize pool, taking home a healthy bankroll addition of INR 7,09,800 for first place.

In heads-up, he was up against female player Ashumi Parekh who plays by the name of ‘ASH1578’. She has also been a regular on Spartan Poker and won an IOPC event last year too. She won INR 4,36,800 for finishing second while Raj added to his list of online poker titles last night. Next stop is the Destiny 10.0 Finale SnG for him!

For similar updates on the top Indian online and live poker tournaments, stay tuned to GutshotMagazine.com.

Don’t have an account on Spartan Poker? Check out their review page here, and don’t miss out on their bonuses, promotions, and guarantee-smashing tournaments. Sign-up now.
Tagged : Destiny, Gokul Raj, Online poker, Spartan