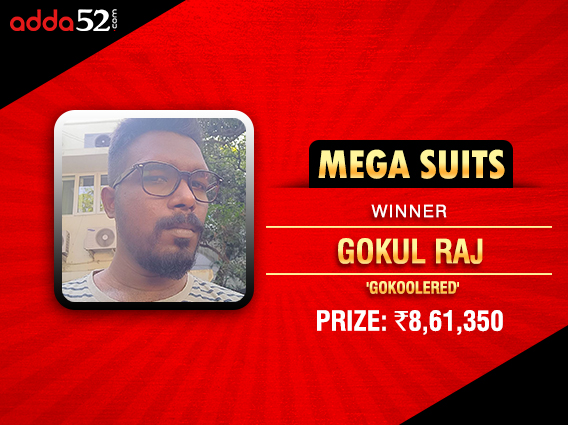 Adda52 is an industry leader when it comes to online poker in the country, with plenty of high-value tournaments taking place at regular intervals. Sundays on their platform are the most popular with a number of tournaments being hosted including the Adda52 Millions INR 20 lakh GTD and Mega Suits INR 30 lakh GTD.

This Sunday’s tournaments saw participation from some of the biggest names in the business, with Shravan Chhabria taking down the Adda52 Millions later in the night, and the Mega Suits finishing a couple of hours before that tournament. With a buy-in half as much as the Millions (INR 5,500), the Mega Suits usually sees a much larger field.

This Sunday, that field had reached 749 entries, with the tournament kicking off at 5pm IST. Players knew that they were in for a long grind and eventually, only 82 from them were paid out a minimum cash prize of INR 10,861. Plenty of Adda52 regulars were a part of the field but only a handful of them cashed out here.

Some known names to make the Final Table included Shravan Chhabria aka ‘sweatmyass13’, who ended in 8th place for INR 71k, but later in the night he made a much bigger victory by shipping the Millions for INR 5.2+ lakh. Sanish Chhabra aka ‘sanish21’ also ran deep, finishing 4th for INR 2.54 lakh, having also shipped Gayle Storm 3.0 recently.

However, the player to take down the title at the end of the night was AceJack stable player Gokul Raj who plays under the name ‘gokoolered’ on Adda52. He was unbeatable on the night and ended with the staggering first-place pay-check of INR 8,61,350 for winning the tournament. In heads-up, he beat ‘saker’ who walked away with the runner-up prize of INR 4,94,340.

In the past, Raj has won some big online poker tournaments, including the Mega Freeze on Spartan last month as well as an IOPC title back in July this year. Now, he secured his biggest online victory on Adda52. When Gutshot contacted the payer, he said, “I’m very happy to beat a tough and huge field and to win a flagship tournament on Adda52. Special thanks to my coach Adi (Aditya Agarwal) and AceJack.”