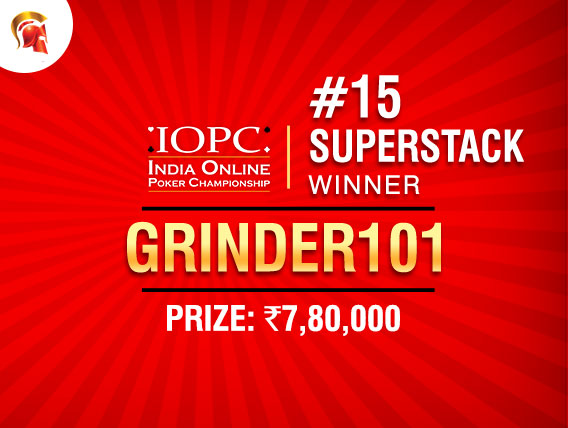 Some of the best online poker tournaments with high guarantees took place on The Spartan Poker yesterday, like it does each Sunday. However, with the India Online Poker Championship (IOPC) on at the moment, these guarantees were raised even further, with players from all over the country aiming for glory in this series.

One of Spartan’s featured tournaments is the Sunday SuperStack and this tournament kicked off at 7:30pm IST last evening, with an increased INR 30 lakh GTD prize pool. IOPC Event #15 SuperStack INR 30 Lac GTD (5500 RE) went on until the early hours of today morning and ‘Grinder101’ was crowned champion.

Abhishek Kumar was the winner of last week’s Sunday SuperStack, winning INR 5.73 lakh. This week, the same tournament had a buy-in of INR 5,500 and 598 entries were recorded, with the top 60 players walking away with a minimum cash prize of INR 12,000. Grinder101 outlasted these entries and he was awarded a massive prize of INR 7.8 lakh for this effort.

Grinder101 built a chip lead of nearly 9:1 against his heads-up opponent ‘setmeup’, before they arrived at the final hand of the tournament in Level #49, when the blinds were running 40,000/80,000 – 10,000. The board opened A-10-10-6-A meaning both players hit two pairs – Aces and Tens, with Grinder101 winning on the river with a Queen kicker and beating his opponent’s pocket sevens. Gutshot contacted the winner after this big win but he wished to stay anonymous. setmeup finished as runners up and he was awarded INR 4.8 lakh for second place.

Keep reading GutshotMagazine.com for regular updates on the ongoing India Online Poker Championship that will be played on The Spartan Poker until the 22nd of July 2018.