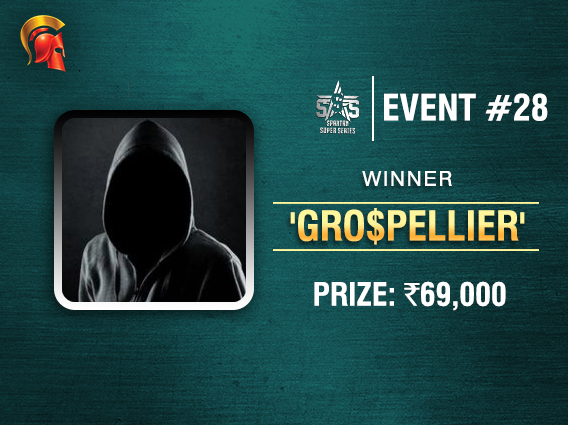 The Spartan Poker’s ongoing Spartan Super Series (SSS) completed its penultimate day of action yesterday and the first event of the day was taken down by the ever consistent Anirban ‘pokernoob’ Das claimed the DareDevil Lite tournament. That was followed by the second tournament of the day which kicked off at 4:00 pm and after a little over 5 hours, we had a winner in ‘Gro$peLLier’ who came out on top of the competition.

This late afternoon tournament was Event #28 on the SSS scheduled and promised a 3 Lakh guarantee to participating players for a buy-in of INR 990. A total of 172 entries took part and 24 of those would eventually make it to the money with a min-cash of INR 3,000 going to all of them. Anirban Das was multi-tabling in this event and ran deep here making the final table. His 7th place money finish netted him a payday of for INR 12,000. Another player who made an impressive finish on the FT was ‘BlueLays’ who also shipped his first SSS title on Wednesday night in Event #8. Unfortunately for him, a second title wasn’t to be on this day as BlueLays finished in 3rd place for a payday of INR 31,500.

Action for the title and the biggest chunk of the prizepool came down to Gro$peLLier and ‘harshitkumar17’. Gro$peLLier had a commanding 1.7 million stack and when he eliminated BlueLays, he took that stack to over 2 million. It took just two hands for things to come to an end in this tournament. harshitkumar17 had a little over 300k and knew he had to do something soon. After calling Gro$peLLier’s preflop raise, he (Kh 8h) managed to hit his King on a flop of 2d Ts Kd and decided to play coy and check.

Gro$peLLier (Jh 2s) who held just bottom pair was happy to see a free card and checked as well. A disastrous turn Jd for harshitkumar17 who decided to ship it all-in repping the flush. But the turn also gave two pairs to his opponent who was not going anywhere. The cards turned up and harshitkumar17 saw the bad news with Qh on the river not helping his cause. First place prize of INR 69,000 went the way of the winner ‘Gro$peLLier’ while harshitkumar17 got INR 46,350 for coming second.

More tournament coverage coming up so stay tuned to GutshotMagazine.com!