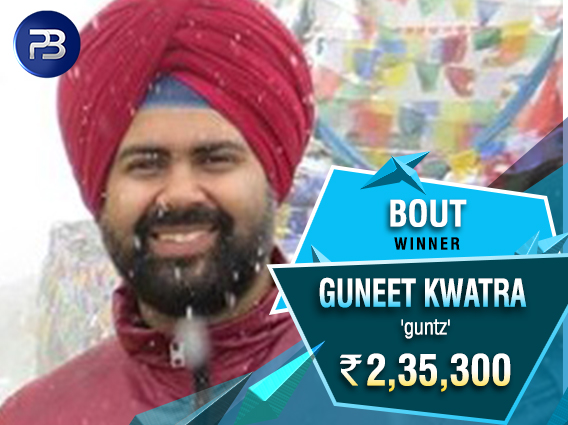 Monday is probably the most hated day in the week as it means the start of another week, which brings in several new tasks and challenges. However, poker players have the chance to kick away these Monday blues as online poker is always full of excitement, with featured tournaments throughout the week across all websites.

PokerBaazi is no different in that regard, hosting The Bout INR 10 Lakh GTD every Monday night on their platform. Yesterday too, the tournament began at 8pm and had a buy-in of INR 4,400. By the end of the registration period, we had 226 entries joining the action which missed the guarantee slightly and eventually, the top 27 places were paid out a minimum prize of INR 8,300 each.

Another very well-known player called Guneet Kwatra aka ‘guntz’ reached heads-up against ‘AK10JQ’ and these two went back and forth for a while before the winner was declared. Kwatra managed to overcome the field and the threat from his heads-up opponent, winning yet another PokerBaazi title and also the top prize of INR 2,35,300.

As for the runner-up, he took away INR 1,65,100, another player who has been playing on PokerBaazi since a very long time. The platform hosts daily featured tournaments and all of these guys who participated last night will also be looking forward to playing Endeavour INR 15 Lakh GTD also later tonight.

For all updates on the biggest victories in online and live poker in India, stay tuned to GutshotMagazine.com.