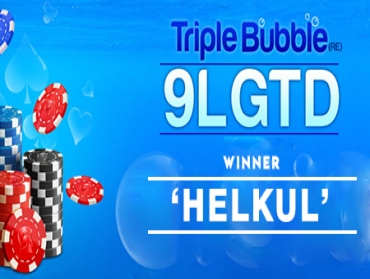 It is one of the more innovative tournaments taking place at the virtuals felts of Indian poker rooms. The Triple Bubble tournament at The Spartan Poker features a 9 Lakhs prizepool guarantee which is an attraction in its own right. However what makes it a unique tournament is that players are paid out in not one, not two but three bubble positions! The player who claimed the win though with the biggest share of the prizepool was ‘helkul’ making this his second title win this week after claiming Wednesday night’s Destiny 6.0 edition.

A total of 321 entries swelled up the prizepool past its guarantee to settle at INR 9,63,000 in this INR 3,300 buy-in tournament that takes place on Friday evenings. 31 players were assured of a payday of INR 8,474. Coming back to the uniqueness of the Triple Bubble format, there are three additional payouts given. The first is to the player who finishes on the stone bubble, in this case, the 32nd place finisher Anirban ‘pokernoob’ Das who will get back his original buy-in of INR 3,300. A traditional which is popularly seen in events like the World Series of Poker Main Event where the bubble boy/girl is given a free entry worth $10,000 into the following year’s Main Event. The next bubble is the final table bubble where the player finishing in 9th place (since all tables in this tournament are 8-handed) is given a ticket to Spartan’s monthly signature 1 Crore GTD The Millionaire tournament. That free ticket worth INR 7,700 went the way of ‘setmeup’.

From 8-handed, it got whittled down to the final two in contention of the title. The winner would take the biggest share of the prizepool but the runner-up would be the 3rd bubble payout getting a free ticket into the afore-mentioned Millionaire tournament plus a ticket in the preceding week’s Two of a Kind (2.o.K) tournament. The combined value of these extras is INR 13,200 and that went the way of ‘omgrachelgreen’ whose pocket Nines lost to helkul’s Th Jd when it hit the bigger two pair on a board of 4s Tc 5h 8h 5c. helkul won INR 2,03,674 while omgrachelgreen got those free tickets and a payday of INR 1,37,131 for runner-up.