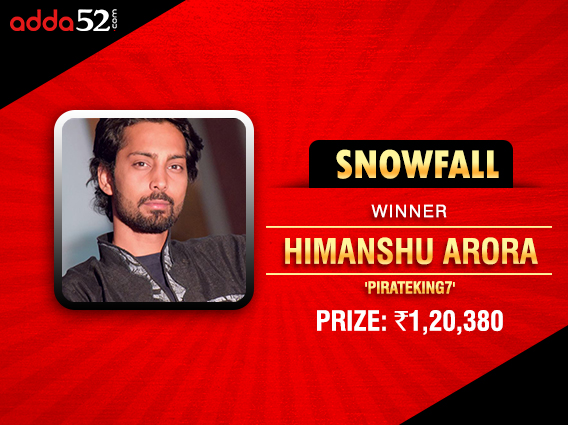 Adda52, known for their high-stakes online poker tournaments being hosted daily on their platform, has recently introduced another such tournament called ‘SnowFall’. It has a unique appeal to it. The buy-in of the tournament is set at INR 500 but the guaranteed prize pool is at a staggering INR 10 Lakhs.

Yesterday saw the first ever SnowFall on Adda52. The event started at 7pm on the website and attracted a huge field of over 1,900 entries, with top 197 players receiving a pay-out, minimum cash being INR 1,871. The event ended at 3:51 am today morning and the crowned champion to emerge from the almost 9-hour gruesome grind was Himanshu Arora aka ‘pirateking7’, who cashed out a sizeable INR 1,20,380 following a three-way deal.

The three-way ICM chop that happened was between Arora, the runners-up Karan Thakker aka ‘karannthakker’ cashing out INR 1,17,710 and Abhishek Meena aka ‘tullu123’ bagging INR 1,15,448. Arora being ahead in chip counts, got the largest share out of the prize pool.

The runners-up, Thakker, was quoted saying, “The best part was that the field was a huge one with 1900+ entries and it’s quite amazing to survive till the end”.

Arora, currently living in the poker hotspot of Bangalore, has cashed out sizeable amounts online in the past, including finishing 2nd at the Adda52 one-time tourney for INR 1 Lakh. The player is also a Poker Sports League (PSL) Kolkata Kings team member. This just goes to show how dedicated and enthusiastic he is about poker, if the 9-hour grind he endured to ship the SnowFall is not indicative enough.

Due to the low buy-in high GTD nature of this tournament, many poker pros find it useless to play in such events that end up attracting a large field of newbies and often run for a long time.