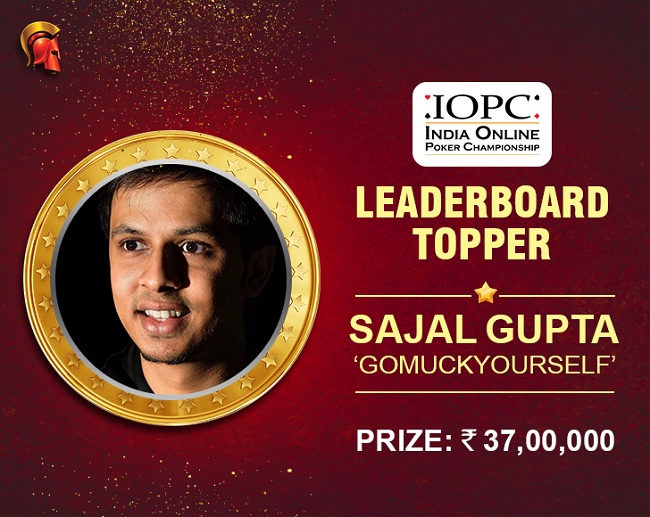 India’s biggest poker tournament series India Online Poker Championship (IOPC) concluded just two days back and tourney enthusiasts can look forward to another value series taking place at the end of the month at The Spartan Poker. The site is hosting its Little Big Series (LBS) from 25-28 January guaranteeing INR 22 Lakhs in overall prizepools. The four-day series is scheduled with 18 high-value tournaments like Mini Biggie, Warm-Up and everyone’s favourite Main Event. Coming back to IOPC, a total of INR 27 lakhs was up for grabs for players competing for points on the IOPC Leaderboard. A massive top prize in the form of a brand new Jeep Compass automobile would go the way of the winner Sajal Gupta a.k.a ‘GoMuckYourself’ who emerged as the winner on this leaderboard.

Gutshot was able to speak to the 23-year old Gupta who is a graduate of IIT-Delhi. Since 18 months he is living and working in Bangalore since then. We caught up with him in an email conversation and here are the excerpts;

Please tell us about your journey of playing online and live poker.
I started playing poker in college and it got me and my friends hooked in no time. I started off playing small games but moved up quick online after a poker tournament was organized in our college fest. That opened the door to online poker for me and initially, I just played online to get some extra cash to chill since I was so intrigued by the game. In the last year, I have started working on my game and have improved a lot. I am a recreational player and not a professional, but I guess I can say that I am able to hold my own against some very good players in online cash games.

One thing which I must mention is the poker success so many of my friends with whom I played 500 rupee buy-in cash games in college have had. So many of them are big winners and have had huge scores at MTT’s and cash games both live and online and this feels good to see everyone doing so well.

Please share some highlights in the journey of winning the IOPC leaderboard.
Well, there is just one highlight, to be honest. I managed to bink 2 of a Kind (2.o.K) which is one of the flagship Spartan tournaments. That gave me a huge lead at the top and after that, I played and tried to get as many points as I could to get points on the board since my competition was mostly with the eventual Main Event winner. My target was to get to 13.5k points so if some with less than 2k points won the main event I would have still won. I couldn’t achieve my target as such, but I was fortunate that the Main event was shipped by someone who didn’t play a lot of the series before that and that sealed it more or less.

What are the other tournaments you played across IOPC?
I started off with 2.o.K then played everything except Super High Roller and PLO Super High Roller. This is a big number for me as I mostly play cash and the flagship tournaments. It was a good experience and has given me huge respect for tournament players who are able to play their A game day to day out irrespective of stakes.

Who do you think were your strongest competitors for the leaderboard?
There were some truly outstanding players playing the series and I don’t even need to name them. However, the way it was structured such that anyone, no matter how good, would have had to do something extraordinary to beat me without winning the Main Event. Thankfully, nothing of that sort happened and I managed to clinch it.

Future goals in poker?
Keep getting better and see where life takes us.

What are your take on The Spartan Poker?
Absolutely Fantastic! What The Spartan Poker has been doing with their promotions is nothing short of a revelation for Indian online poker. I have to appreciate the entrepreneurial spirit of the founders who envisioned that tournaments like the Millionaire will eventually be beating guarantees every month. Tournaments being 8-handed is something which I personally like and their TDS policy is again something that is miles ahead of everyone else.