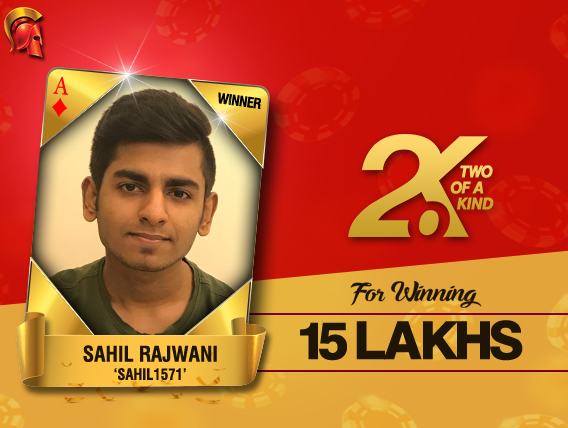 Yesterday we spoke about October’s Two of a Kind (2oK) tournament where two players in Sahil Rajwani and Utsav Taneja picked up the top prizes of INR 15 lakh each. Gutshot then caught up with both players individually to get to know more about their poker backgrounds and the tournament experience for each one.

Sahil Rajwani was one of the winners and he plays under the name ‘Sahil1571’ on The Spartan Poker. He is based in the northeast region of the country where river Ganges flows – the city of Patna (Bihar). Rajwani recently turned 18 years old in April 2018 and is now pursuing his first year in degree college. He belongs to a business background, but he believes poker is a journey all about being self-made.

Speaking on his introduction to poker and his journey so far, he stated, “I was introduced to poker by some of my friends last year. At that point in time, I had an impression that the game is nothing, but a gamble and luck is essential to win in poker. Still, for a try, I started playing with my friends for free chips and slowly but steadily, I started to explore and found out it’s nothing related to gambling in fact it’s a skill-based game. Then, I studied about poker and improvised my game. I was underage, was waiting for 18th April. As the day came, I turned 18, and I made an account on websites and started playing.”

Talking about winning the Two of a Kind tournament, he said, “The journey of the 2ok tournament has been amazing and it was a mix of some really good professional and recreational players. Durga Deepak and Kunal Vaswani worked on my game off the felts and prepared me for this huge tourney. They supported throughout and shared their poker knowledge to help me crack this field. In the last few tables of the tournament, I caught some good buffs which helped me to chip up.”

He further spoke about key hands in the tournament, saying, “It was a roller-coaster ride. I won a couple of key flips and stole a couple of decent pots when it was much needed. Luckily, the poker Gods were on my side. A turning point in the tournament was the one where I remember I checked my big blind with J 3 when small blind limped and flopped middle pair. SB checked, and I bet half pot. He raised me, and I called. Turn was a blank card. He barrelled again half pot on the turn and I cold called. River was a blank too. He barrelled really big on the river leaving him with just 50k chips. I took some time to think about the hand and then I made the call with middle pair 3-kicker and he showed bluff. I chipped up and had a very decent stack that gave me a great confidence to play further and put some pressure on smaller stacks. The most important thing was when we were left 3-handed. It was a huge pay jump and the title was at stake. I had a slight chip lead over the other two, so I kept putting ICM pressure which forced them to play against each other. This gave me a big advantage to win this tournament.”

Gutshot congratulates Rajwani on this big win at such a young age of just 18 years. As for our viewers, can also keep reading GutshotMagazine.com for more updates on such big wins and interviews with the top Indian poker players.