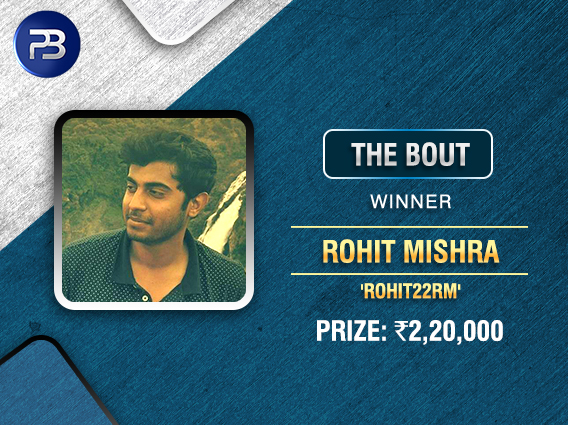 PokerBaazi is one of India’s top poker companies and they place great importance on innovation and keeping their players happy. Apart from a new interface and the ‘Baazi Rewards System’ being set in place, they have also launched a few new tournaments and leaderboards.

One of their latest tournament launches was The Bout INR 10 lakh GTD, a tournament that is now set to take place every Monday at 8pm, replacing a tournament called The Big Monday which took place every week at that same time. Yesterday thus marked the first every edition of this new tournament on PokerBaazi.

The Bout kicked off last night and it turned out to be a grind of nearly 6 hours as the tournament came to an end by 1:56am this morning. The field was evenly distributed in terms of players and re-entries, with 124 each, making a total field of 248 entries in this INR 4,400 tournament.

Most of India’s top pros play on PokerBaazi, so it was never going to be easy to get past this field. Emerging victorious on the night was eventually Rohit Mishra aka ‘rohit22rm’. He dominated the rest of the players and will go down into the record books, becoming the first ever winner of The Bout.

He was heavily rewarded for finishing this tournament as the winner, taking away INR 2,20,000 for first-place, after beating ‘Nygma’ in heads-up and getting the big pay-jump. For who play frequently on PokerBaazi will know that Mishra is not someone to take lightly on the virtual felts.

He has plenty of achievements in online poker, especially on Spartan, where he won the IOPC Daredevil tournament in January this year and then also won another prestigious IOPC title in July. Keep reading GutshotMagazine.com for similar updates on Indian poker tournaments and leagues.