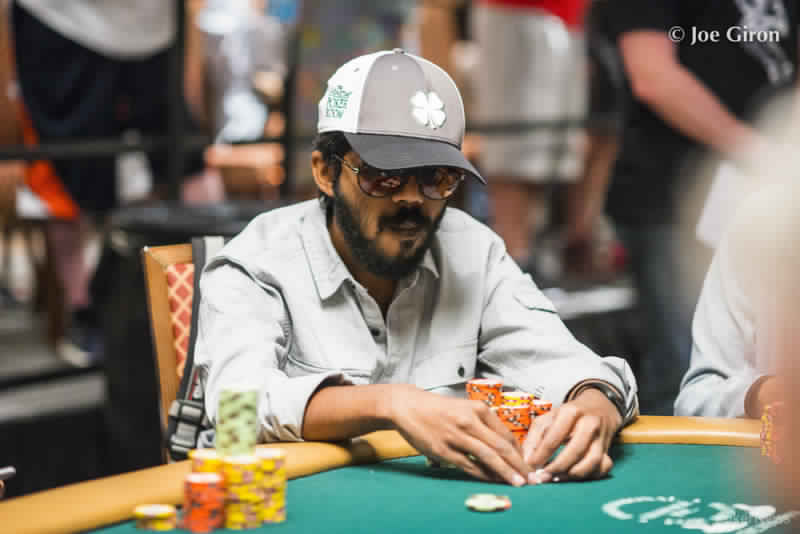 Aditya Sushant in final 14 of Little One for One Drop

Yesterday, top Indian poker pro Aditya Sushant made headlines for finishing Day 2 of Event #68: $1,000 + 111 The Little One for One Drop No-Limit Hold’em second in the chip lead, with the original field of 4,732 entries narrowing down to the final 125 survivors. Sushant’s big stack kept his dreams of a second WSOP gold bracelet alive as the players bagged up their chips for the day.

Coming out on Day 3, Sushant kept grinding and found himself among the final few players, all set for another WSOP cash and another big prize. He lost his monster chip stack during the day and was languishing around the bottom, having one of the lowest stacks since play was down to the last 25-30 players.

However, he showed off his skills by winning a few pots here and there and making a deeper run in the tournament. Most would’ve expected a bust for Sushant a while earlier, but he did brilliantly to stay alive and finish among the final 14 survivors that bagged up to return on Day 4 of the tournament.

Sushant will go into Day 4 with a chip stack of 2,385,000 while USA’s Christopher Staats has the chip lead with 6,715,000 in chips. Sushant is 10/14 at the moment but just has a chip deficit of 1:3 with Staats, which means the hopes of a second bracelet are very much alive.

The final 14 are guaranteed a minimum payout of $29,490, but Sushant will have his eyes on the big prize of $559,332 which is set aside for first place. Another Indian who did well in this event was Sanjay Taneja, cashing out in 29th place for a payout of $15,042, even though he started the day with a below-average stack.

Justin Liberto and Sushant are the only previous bracelet winners in the mix and we’re hoping Sushant can continue his good run tomorrow. Keep reading GutshotMagazine.com for an update on how well our star Indian player does on Day 4.