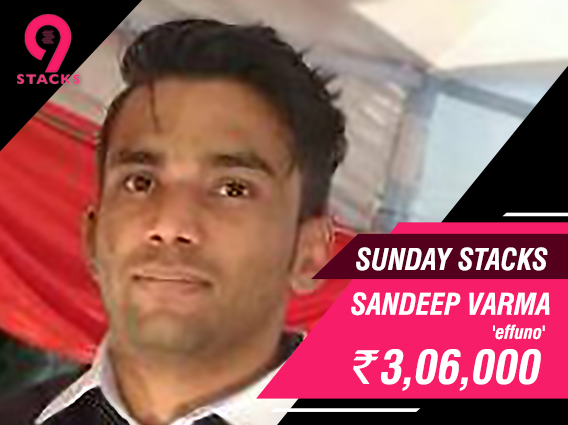 Sandeep Varma plays across most online poker websites as ‘effuno’ and if you get this guy on your table in any major tournaments, you know you’ve got some good competition on your hands. He’s won plenty of major titles in recent months including being one of the 5For5 winners on Spartan Poker last month.

His latest title came last night when he took down Sunday Stacks INR 15 Lakh GTD on 9stacks (sign-up with code “GUTSHOT”) for a handsome bankroll addition of INR 3,06,000. This happens to be 9stacks’ biggest weekly offering and by the end of the night, he outlasted some big names and a total field of 224 entries to win the title.

The tournament began at its usual scheduled time of 8pm and ended by 2:08am this morning, concluding a grind of slightly over 6 hours. Each entry paid the INR 5,500 buy-in and it wouldn’t have been an easy journey for Varma as there were a number of regulars and pros in the 40 top positions that received pay-outs (min-cash – INR 12,750).

Among them were Rajat Sharma aka ‘OshoSwami’ (36th), Chandni Malik aka ‘maidumji’ (29th), Harsh Dembla aka ‘dembla’ (20th), Akshay Nasa aka ‘rahuldravid’ (19th). Neeraj Kumar aka ‘SelfClaimedPro’ (13th), Anurag Srivastava aka ‘AnuragSrivastava’ (8th), and others.

3-way itself was extremely intense as it included Shravan Chhabria aka ‘Kissmyace’ and Neel Joshi aka ‘Worm33’ with the former eventually busting in 3rd and the latter hitting the rail in 2nd to settle for the runner-up prize of INR 1,95,000. Talking about the tournament, he said, “It was a fun ride. I had a stack comparable to that of the chip leader at the start of the FT and I stayed patient. Then came a stretch where I won a few big pots and eliminated most of the opponents.”

He spoke further about the heads-up battle, saying, “I had a massive 12:1 chip lead vs Neel Joshi. He doubled up twice, and then went all-in vs my double barrel with a meagre top pair; and even had the audacity to wish me good luck before shoving all-in. Why would anyone think I needed any more luck in that tourney is beyond me. What a fish! I had a set and had him drawing dead. No one was out-luckboxing me in that tourney! He is a good friend of mine. So, it was even more important that I crush him.”

“All jokes aside, always happy to win a daily major. I’ve had a good run in their prime and powerplay leaderboards and the Vegas promo, but not as many MTT wins. This was a tourney with a very good structure, played by some of the best players in the country. So, definitely something I can be proud of. Hopefully I can take this momentum into the powerplay SnG today.”

For all updates on the top poker tournament in India and around the world, keep following GutshotMagazine.com.